First images of the production version of the Alfa Romeo 4C were released yesterday, just weeks ahead the cars official debut at the Geneva Motor Show. The images show a car that is little changed from the Alfa Romeo 4C concept car that premiered at Geneva in March of 2011. 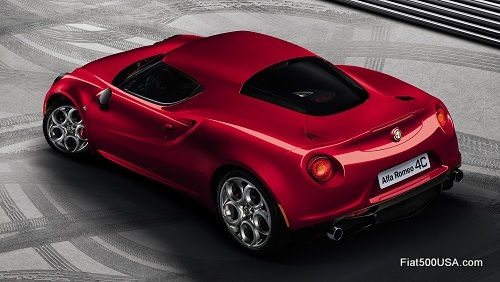 The Alfa Romeo 4C heralds the rebirth of Alfa Romeo and showcases the technological capabilities of the storied Italian marque. It has been deemed that from now on, all the latest technology of the Fiat Group will make their first appearance in Alfa Romeo products and the 4C is an example of this.


The gorgeous Alfa Romeo 4C concept car. The Alfa 4C has already won awards before it even hit the streets or tracks: the ‘AutoBild Design Award’ (2011, Germany), the ‘Design Award for Concept Cars & Prototypes’ (2012, Italy) and the ‘Most Exciting Car of 2013’ - ‘What Car?’ (2013, Great Britain). The exterior of production car is very close to the show car, save for some minor details. We will have to wait for images of the cockpit of the production Alfa 4C, but sources say expect to see carbon fiber and a race car like gauge pod set.


Careful attention to weight, balance and power guarantee high performance. The two seat mid-engine car's chassis is made entirely of carbon fiber and the car will be manufactured at the Maserati production facility in Modena. The lean and luscious Alfa Romeo 4C is approximately 157 inches long, 46 inches tall, 78 inches wide and has a wheelbase of less than 94 inches. Weight targets are somewhere between 1,900 - 2,200 lbs with a 60/40 weight distribution. 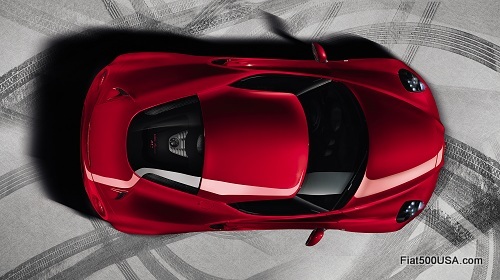 The engine of the Alfa Romeo 4C is a new aluminum block evolution of the powerful 1750 TBi engine used in the Giulietta Quadrifoglio Verde. This is a beast of an engine with performance characteristics said to better that of a 3 liter. The 1750 Turbo engine boasts direct fuel injection, dual continuous variable valve timing, a high-efficiency turbocharger and a revolutionary cylinder scavenging system that eliminates Turbo Lag. In Giulietta Quadrifoglio Verde form, the 235 hp 1750 Turbo produces the highest specific output ever recorded by an Alfa Romeo production engine (134 HP/litre) and also has the highest specific torque (195 Nm/litre) in its category. A torque peak of 251 lbs-ft is reached at just 1,900 rpm. But all these specs should just be considered the starting point, as the new 1750 Turbo developed for the 4C will have specific intake and exhaust tuning, among other enhancements, that will exploit the full performance potential of the 4C. Power is rumored to be anywhere from 240 - 300 hp giving a power to weight ratio, according to Alfa Romeo, of less than 4 kg/HP.

A primer on the Alfa TCT twin clutch transmission, as used in the Alfa Romeo Giulietta.


Getting the power to the ground is Alfa Romeo's TCT twin clutch transmission. The Alfa TCT can be shifted manually, via paddle shifters or left to shift by itself in Auto mode. Lightning fast shifts and continuous power transmission without a loss of acceleration are the benefits.


A look at the Alfa DNA system and how it works on the Alfa Romeo MiTo.


Debuting on the Alfa Romeo 4C is a new Alfa DNA selector with an added ‘Race’ mode. Similar to the Ferrari Manettino switch, the Alfa DNA selector is standard equipment on new Alfa Romeo models and allows you to alter performance and handling characteristics. Until the 4C, the Alfa DNA selector offered three settings – Dynamic, Natural and All Weather. Depending on the model, Dynamic mode typically increases throttle response, initiates overboost and adjusts steering and stability controls for sporting driving. Normal mode softens the drive characteristics and is geared towards comfort. All Weather allows for maximum road holding under adverse weather conditions. The Alfa Romeo 4C Race mode is all new and, while we don't know exactly what driving parameters it will change, it is safe to assume it will offer something similar to Ferrari's Race mode; maximum engine performance and stability settings optimised for racetrack use.

Production of the Alfa Romeo 4C is scheduled to begin in May, at an annual rate limited to approximately 2,500 cars, due to the highly labor intensive use of carbon fiber materials. Word is that Europe and the North America will each receive 1,000 units of the exotic car, with the remaining 500 spread around the world. A North American introduction is likely at the LA Auto Show in November, with US sales beginning next year.

The Alfa Romeo 4C will debut at the Geneva Motor Show, March 7 - 17. Mark your calender!