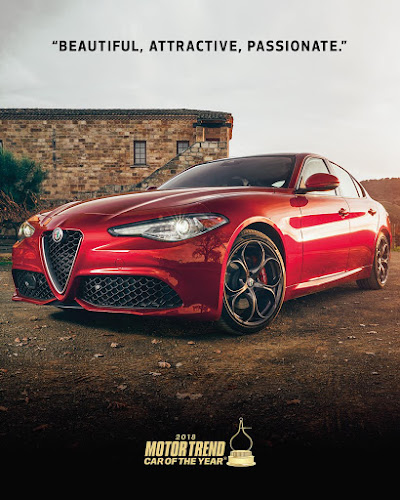 The Alfa Romeo Giulia has won Motor Trend magazine's Car of The Year Award, besting a competitive field of 46 cars. The Motor Trend Car of The Year award is in its 70th year and has developed into an exhaustive evaluation. There are performance tests to measure acceleration, braking, and handling. After that, design and features are evaluated as well as on the road, everyday driving impressions. This year, the competition was fierce with competitors such as the new BMW 5 series, Tesla Model 3, Lexus LC 500h, and Porsche Panamera to name a few.

The Alfa Romeo Giulia was picked over the competition not only for its overall performance, value, and design but also for its sheer driving enjoyment.

Some of the quotes from the evaluation:

“There is sorcery in this car,” road test editor Chris Walton says. “The Giulia fills the space vacated by BMW. Yet even at the apex of its reign, a 3 Series never rode this well or cornered with such poise and precision simultaneously.” 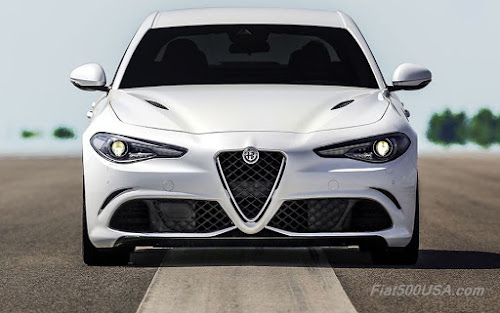 What's important to note is while everyone knows the 505 hp M3 crushing Giulia Quadrifoglio is a top performer, Motor Trend commended the standard Giulia models saying:

"What clinched the Calipers was the base Giulia. Many brands make blazingly fast performance sedans, but when the exercise is reduced by mass-market pressures, the lesser version is often found lacking. Not so here. The $38,990 base Giulia achieves something Acura, Lexus, Infiniti, and Jaguar have tried futilely to do for decades: build a better compact sport sedan than the Deutschlanders."

"Many luxury sedans have imitated the stark Germanic style. But Alfa retained its legacy of what an Italian car’s exterior and interior should look like. It is unmistakable and sensual, imbuing a cosmopolitan glamour to the driver." 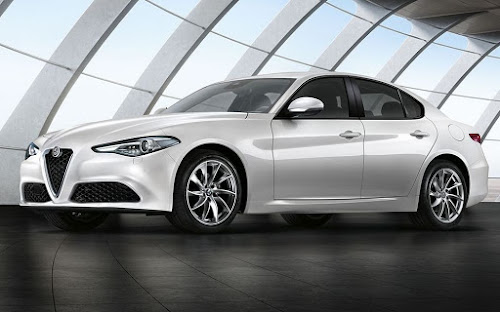 You would think a car with all these attributes would carry a high-end price but what cinches the deal is the Giulia can be considered a bargain. For the price of a mundane and boring Camry, you can get a world class leading sedan. Motor Trend acknowledges this by saying:

"Now let’s talk value. This segment is cutthroat, and Alfa has not flinched at what is expected. After following the industry-standard 36-month, $399/month lease deal, it launched a 24-month, $299/month lease deal that should get the attention of any individual with Maserati tastes but a Mazda budget." 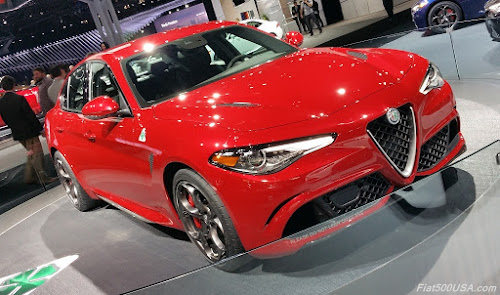 Finally, Motor Trend summed up the Giulia this way:

"The Giulia was the only vehicle whose essence enraptured the jury with its charm and unbridled zeal for driving. Nearly every judge uttered the word “love” when describing this car."

The Senior Feature Editor said it all -

“I would be so happy if every day I got to be in this car."


Give these top Alfa dealers a call or check the link below for the dealer nearest you:


Find an Alfa Romeo Dealer near you


Source and quotes: Motor Trend Alfa Giulia Car of The Year
Images: Alfa Romeo and Author
Posted by Fiat500USA.com at 12:10 PM No comments:

The complete list of features and options available on the 2018 Fiat 500X crossover.

Discuss on the Fiat 500X Forum

Authorized Fiat 500e Dealers Outside CA and OR 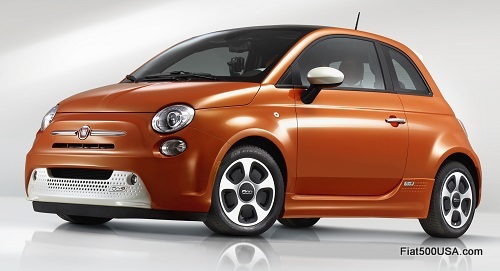 Here is a list of Fiat dealers outside of California and Oregon that are certified to fully service the Fiat 500e EV.

Introduced in 2013 and originally only sold in California and then later in Oregon, used Fiat 500e models have now begun migrating across the country. Don't be surprised if you see one for sale locally. 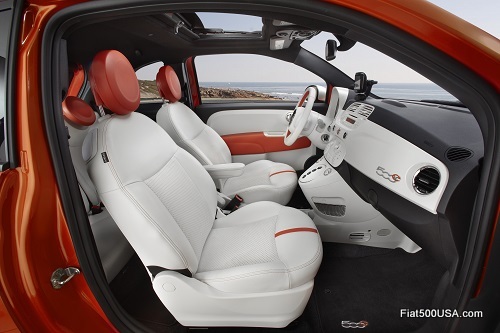 The Fiat 500e all-electric vehicle has been widely acclaimed by the experts and owners alike as a stylish, fun to drive car. Combining the award-winning Fiat 500 with an advanced EV drivetrain at an affordable price has made the Fiat 500e hard to beat. Now with used prices typically in the $10,000 range or less, a used 500e is one of the most affordable electric cars you can buy. Test drive one and you may be hooked!

Source and images: Fiat USA
Posted by Fiat500USA.com at 1:44 PM No comments: 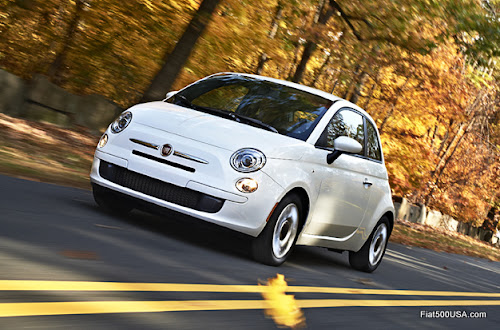 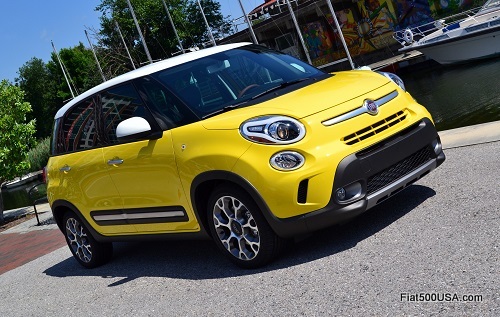 Good news from last month was sales of the 500L MPV were up 34 percent. This is the second month in a row that 500L sales were up. A redesigned and upgraded 500L is expected to arrive at dealeships sometime this fall. 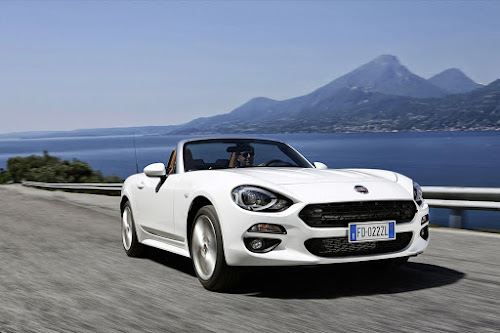 Sales of other Fiat models were not as lucky and all posted numbers less than last year. Hurricane season, the California fires, declining small car sales and one day fewer selling days this October compared to last year all doing their part to keep sales down. Coming up this month, a special, Black Friday Sales event will take place the day after Thanksgiving and is said to offer amazing deals. Hopefully, that will give sales a needed shot in the arm. We will see... 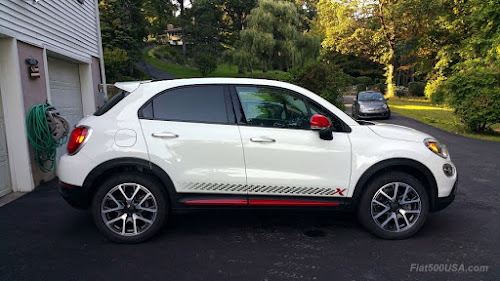 Fiat October News
Continuing our series of 500X do-it-yourself Mopar accessories articles, we tackled how to install a body stripe on your 500X. Mopar has hundreds of accessories available for the full Fiat model range. Check the Mopar website to see what they offer for your car and get installing! 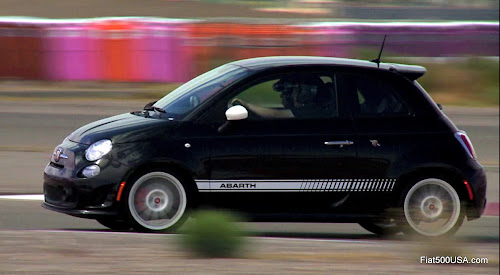 Never been on a racetrack? We posted a video showing what it is like getting track instructions from a professional driver. 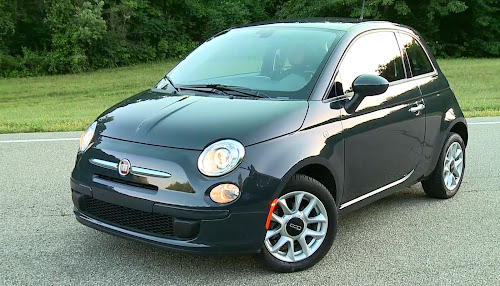 Starting in August and continuing through the month of October, Fiat offered special employee discount pricing to victims of Hurricane Harvey. In Houston alone, over 600,000 cars were lost due to the powerful storm. These pricing discounts were designed to help those struggling to replace transportation so they can rebuild and resume their lives.