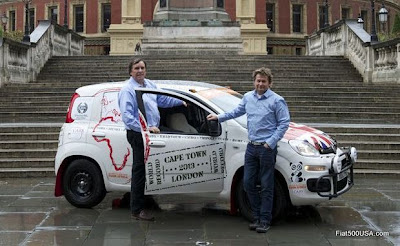 A Fiat Panda just set a new world record for driving non-stop from Cape Town, South Africa to London, England during the 80th anniversary Cape Town to London Run. The Fiat Panda completed the brutal 10,000 mile drive in 10 days, 13 hours and 28 minutes, beating the previous record set in 2010 of 11 days, 14 hrs, 11 mins. English drivers Philip Young and Paul Brace drove the Fiat Panda an average of 1,000 miles per day through 13 countries and two continents. The nearly stock Fiat Panda TwinAir conquered the roughest roads in the world and never missed a beat. 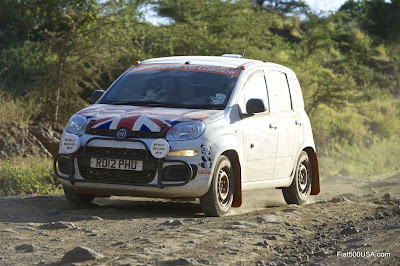 The car chosen was a front wheel drive Fiat Panda TwinAir and was largely unmodified, save for some details. Driving non-stop through the desert required an extra fuel tank and an extra spare tire for emergencies. The seats were swapped out and were fitted with sheepskin seat covers. The covers were mentioned as playing a vital role in keeping the crew comfortably cool during the day but warm at night. It has to be mentioned that the Fiat Panda did not have air conditioning! Added roof insulation and roll down windows provided the only climate control during the whole grueling journey. 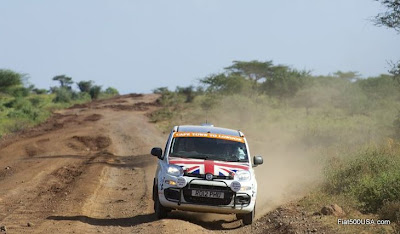 The roads in Africa can often be categorized as just ruts and ditches. What paved roads there are can be thought of as potholes connected by occasional pavement. To cope with this environment the Fiat Panda had the front strut mounts and control arms reinforced and taller springs and heavy duty shocks fitted. Taller and tougher commercial spec tires were mounted to standard steel wheels. A skid plate under the TwinAir's oil pan was installed along with an air intake moved to the top of the engine bay round out the bulk of the modification. It should be noted the crew brought a tool kit of consisting of only a throttle cable, a fan-belt, a tube of super-glue, a roll of duct tape, an adjustable spanner and a screw-driver. 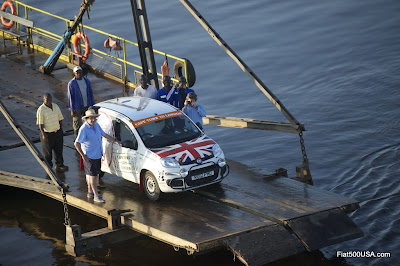 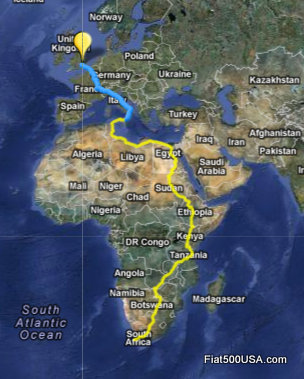 Philip Young and Paul Brace competed to break the record, but also to raise funds to benefit Farm Africa, a charity working with families in rural Africa, helping them to produce food more effectively. Please visit their fundraising page and read more about this worthy cause: 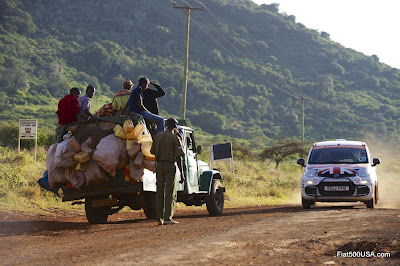 When the Panda is imported (USA) with the twin air motor, then I will consider buying a fiat. If I need a car and have to choose between a large or expensive Fiat with a bigger engine and an efficient 3 cylinder Ford of VW, I will go for cheap, efficient and compact.