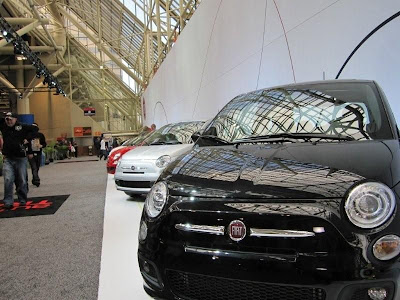 Fiat Canada has a strong presence this year at the 2011 Canadian International Auto Show held in Toronto, February 18 thru the 27. The Fiat 500 display is a highlight of the auto show.

A friend of this blog has sent us a report on the Toronto Auto Show. He goes by the user name of peterjerome and has contributed content and pictures to this site on numerous occasions. I would like to thank him for the following post he sent me.

Here is a little report and photo collection from the Toronto Car Show. As you will see FIAT did a good job of their presentation. 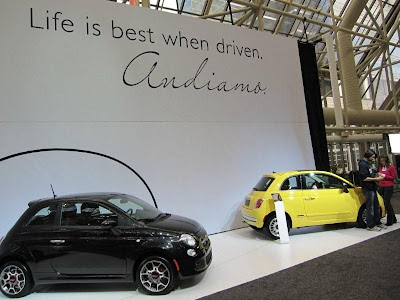 Though you may be surprised to know it, one of the six major International Car Shows in the world is the one that is taking place right now in Toronto Canada. It runs from the 18th to 27th and officials are expecting over 300,000 visitors in that time. FIAT has put together a very impressive display, for what has to be one of their most important markets. 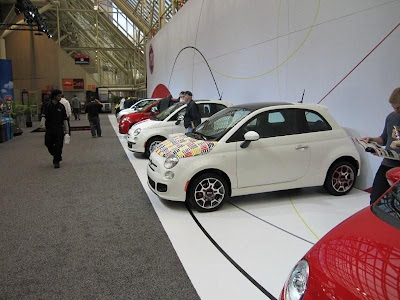 Toronto's metropolitan area has the better part of six million people, with one and half million of them considering themselves to be of Italian origin. Canada in general is very large market for fuel efficient cars, due to our higher costs for gasoline. I read somewhere that Laura Soave and Sergio Marchionne have made a bet as to which country (United States or Canada respectively) will purchase more 500s, notwithstanding the fact that there are ten times as many people south of the 49th parallel. Lastly Mr. Marchionne grew up in Toronto. 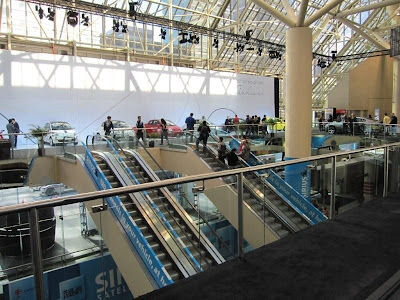 The FIAT presentation is very impressive. In an area where the majority of the visitors will enter the show is a display of ten 500s. Close by is the Galleria FIAT with a Sport and Lounge model that are getting a lot of "butts on" visits. 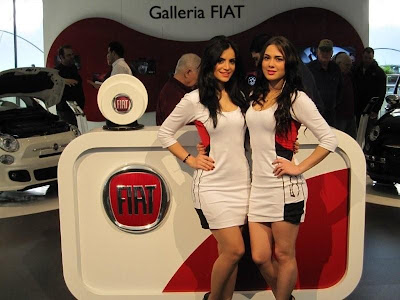 The representatives at the booth are salespeople from local dealerships who are reasonably knowledgeable. The trademark women in white dresses are there for photo shoots. There are also designer couches done in white leather to rest one's weary feet. 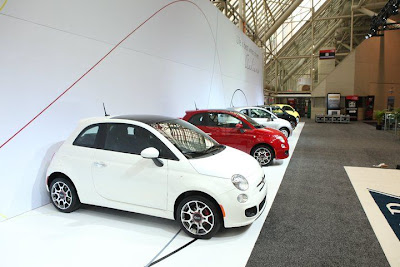 From what I can see from the US and Canadian websites, our Pop model is $500 more expensive than the US version, but is also missing speed control and air conditioning. Our Sport is $1000 dearer than the US version. The Lounge models seem similarly equipped and priced. On the US website the Sport and Lounge boast a BOSE premium sound system which seems to have been removed at Canada Customs as well. Thankfully air conditioning can be added to the Pop for only $175 and the BOSE speakers come in at $350. Still the overall price differences must have something to do with retribution for Olympic hockey. 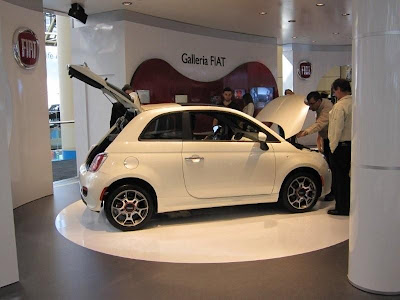 The rest of the show is very good. There is a display called Concorso Exotica. In it are a Nuova 500, an Abarth 600, a Lamborghini Miura S and Countach, an Alfa Giulietta Sprint, and a gaggle of Ferraris, including a 250 GT, a Daytona, a Dino, and an Enzo. If you are in the area in the next little while I suggest a visit.

Thanks peterjerome for the report!
-Chris
Posted by Fiat500USA.com at 12:11 AM

Ciao Peter Jerome, this is Frankie from Milan, Italy. I am curious to know whether the Fiat 500 can withstand the cold weather in Canada. Do you have any information regarding this? Thanks. Nice pictures. Are the stand girls of Italian descent? Take care.

"Are the stand girls of Italian descent?"

What girls? I was looking at the cars. LOL.

Hello Frankie
I did talk to the girls, but not about their heritage. They were happy to jump in front of a camera, which is the way it is at Italian shows.
On this site you can search "testing". It tells us that the 500 was tested for 4 million miles (over 6 miilion kilometers)for the North American market. I am sure that included cold weather. Also Sr. Marchionne seems to have a good idea of North America automotive needsand trends.
I have heard a rumour about a 500 model with 4 wheel drive...Boh?

Super report Peter! Sorry to hear our brethern north of the border are paying a bit more for a bit less but, as you note, that's all Crosby's fault!

Thanks again for the report.

There is ample documentation reporting on the heating and cooling for N. America. The 500 has had its H/VAC system vastly improved to accommodate the vast temperature extremes found in all of N. America, that includes the US and Canada (and Alaska for that matter) and I would also venture to guess that goes for engine cooling too.

The car has had some significant changes made to it in order to accommodate the finicky N. American driver and heating/cooling was one of them, as was the ride, longer suspension traveling was added along with revises spring rates for damping help keep the handling intact, while keeping comfort present for long journeys on the expressways and yet the car can handle turns with aplomb and be super fun to drive.