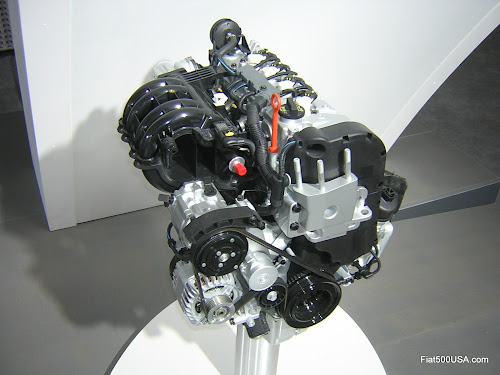 The Fiat 500 has a jewel of an engine. It is based on a ground breaking design originating more than twenty-five years ago. Smooth, lively and full of character, it delivers as many smiles per mile as miles per gallon. In this post, we will look at the construction of the Fiat 500's engine with the help of some never before published images and specifications for the North American 1.4L MultiAir engine.


Let's take a look inside this special engine: 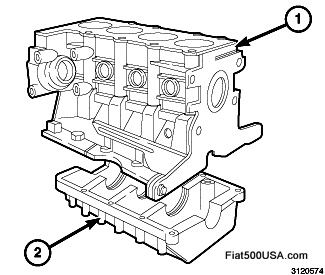 CYLINDER BLOCK
Description Specification
The engine block (1) is made from cast iron. The crankshaft is supported by five main bearings. The thrust bearings are attached to the center upper main bearing. To keep the pistons cool, the cylinder block has four piston cooling jets located under the main bearing shells. The cylinders are formed directly into the engine block. A knock sensor is located on the left side of the block.


The function of the bedplate is to: 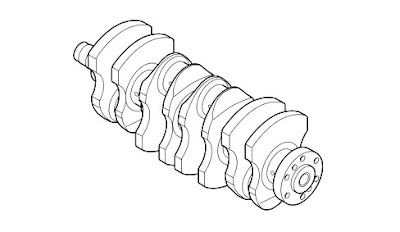 CRANKSHAFT
The crankshaft is made from induction hardened forged steel. Eight counterweights at 180° balance the crankshaft rotary mass. The main journals are crossed drilled for rod bearing lubrication. The crankshaft is supported by five select fit main bearings with the center bearing serving as the thrust washer location. Both the front and rear seals are a single piece design and are mounted to the oil pump and cylinder block. 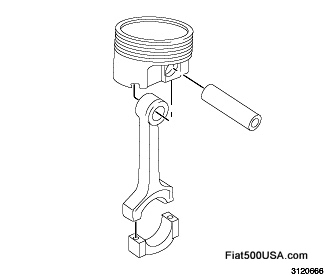 PISTON AND CONNECTING RODS
The pistons are a lightweight design with low tension piston rings that improve fuel economy. The pistons are made of a high strength silicon aluminum alloy and the piston skirt has a Moly® coating. The piston pin is a press fit into the rod. The connecting rod is forged steel with a bolted cracked cap design that provides more precise crankshaft bearing geometry than the traditional  procedure in which rods are sawed in two. 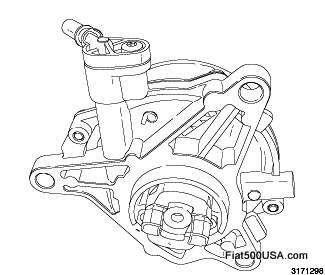 VACUUM PUMP
The vacuum pump supplies vacuum to the brake booster and is mounted to the rear of the cylinder head, driven by the camshaft. 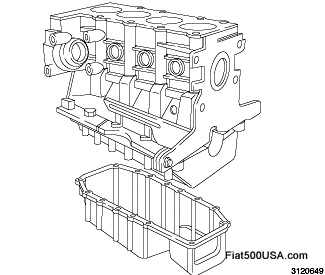 OIL PUMP
The lubrication system consists of the following components: 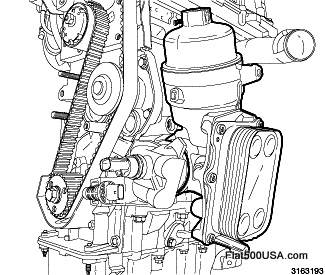 OIL PAN
The oil pan in the Fiat 500 is made from aluminum with a threaded oil drainage opening and a threaded port for an oil viscosity sensor. 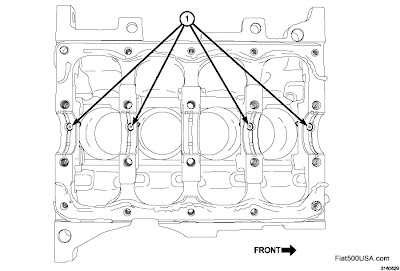 OIL SPRAY PISTON COOLING
The 1.4L engine has four engine blocked-mounted oil jets (1) installed to cool the underside of each piston. The oil jets are fed by the main oil gallery, and spray upward on the bottom of the pistons and cylinder walls. Each jet has a check valve which closes to maintain ample oil pressure at idle. All four oil jets are identical and are a press fit to the engine block. 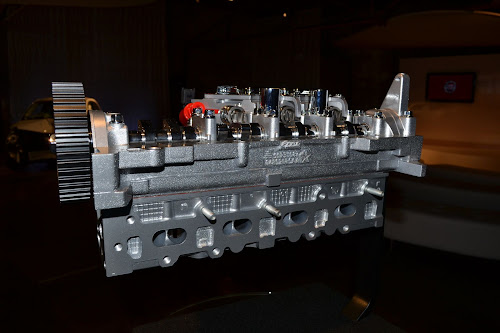 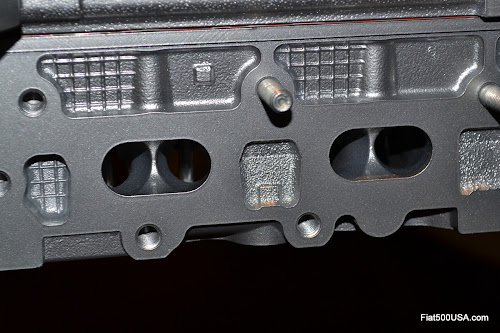 The exhaust port of the Fiat 500 1.4L MultiAir engine 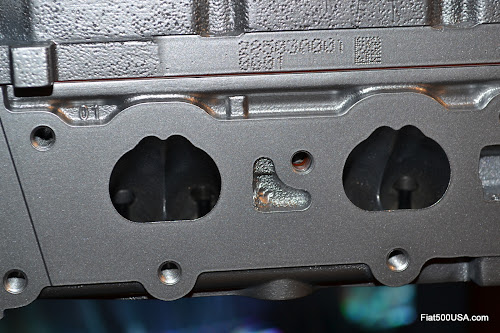 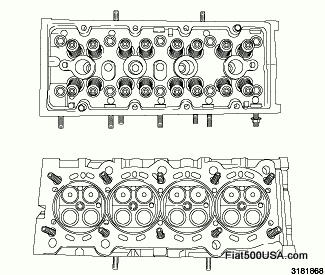 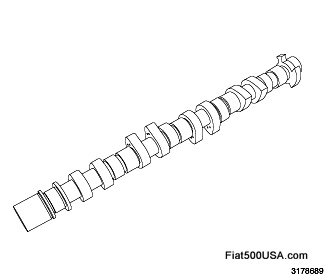 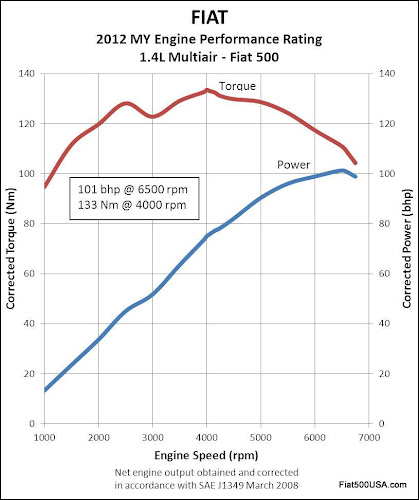 The North American Fiat 500 engine produces 101 hp and 98 lbs.ft of torque, however, that is just part of the story. MultiAir enables the 500's engine to have increased throttle response and optimizes torque at part throttle openings, allowing the 1.4 liter engine to have the flexibility of a larger engine.


How MultiAir Works and the Advantages

MultiAir technology manages the torque and power delivered by the engine by varying the lift profile of the intake valves without direct use of the throttle body. The main features of the MultiAir engine are:

Compared to a traditional engine, the special characteristics of the MultiAir system offer better combustion control and a faster response to torque requests, both of which are available and exploitable at each top dead center (TDC). This means: 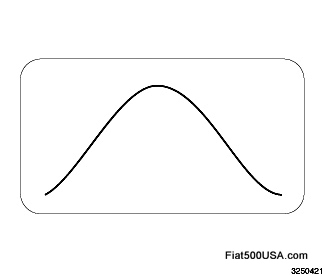 Full Lift. When variable valve actuation functions in the full lift phase, all of the camshaft lobe lift is transferred to the intake valves. The intake camshaft lobe is designed with a very aggressive lift and duration profile. This results in good power in the upper RPM ranges with high loads. This profile would rarely be used in everyday driving. 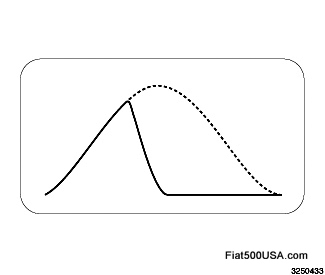 Early intake valve closing (EIVC). When variable valve actuation functions in the EIVC phase, the camshaft lobe lift is transferred to the intake valves at the beginning of the lift duration cycle. However, the hydraulic connection between the camshaft lobe and the valves is taken away before the lobe reaches full lift. The exact timing and lift can be infinitely varied to meet driver requirements. EIVC provides smooth engine performance and more torque at lower engine speeds. 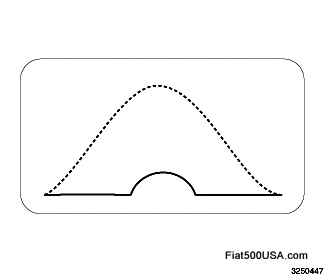 Therefore, as long as the hydraulic connection is completed before the camshaft lobe reaches its maximum lift, some valve lift will result. The lift profile will follow the camshaft lobe profile for the time that the hydraulic link is complete. Like EIVC, the exact timing and lift can be infinitely varied to meet driver requirements. LIVO provides lower emissions and a higher efficiency at lower loads or idle conditions. 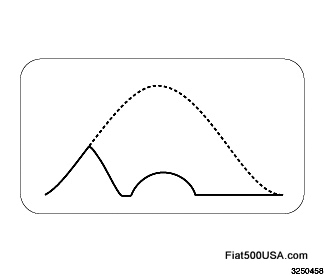 Multi-Lift. Multi-Lift is a combination of EIVC and LIVO because the hydraulic connection between the camshaft lobe and the intake valves is closed early and then re-opened later in the cycle. This creates a longer duration valve lift with a smaller amount of lift. The result is a higher velocity of air flow into the cylinder over a longer period of time. Multi-Lift may be used in mixed driving of acceleration and deceleration with moderate engine speeds. 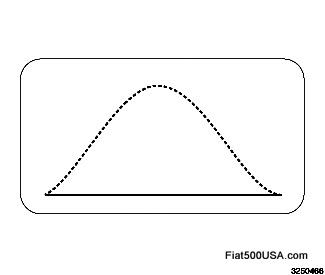 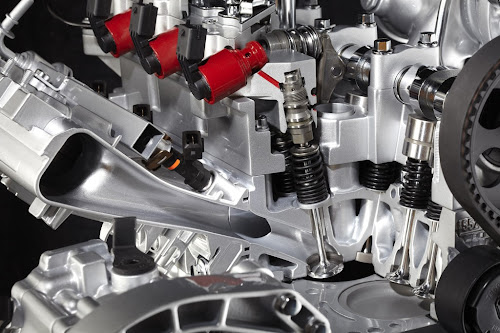 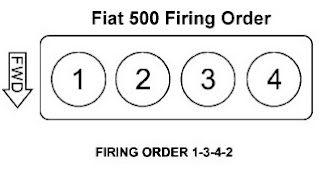 After seeing this, now I understand why I want to shift at 4000 rpms!

The Multiair system, while "clever", does not seem to yield any appreciable differences in either the power or torque curves from more standard valve actuation methods. What am I missing here ... ???

What is missing is driving the car. The biggest difference isn't on these dyno sheets, it is part throttle response and drivability. For example, MultiAir allows you to drive at lower rpms and have the small engine still accelerate without lugging. You have to drive the car and compare it to the car without MultiAir to see and feel the difference.

Chris,
Love the site, love the cars. My first Fiat was a 68 850 Spider in 1970. Tons of Fiats later, I now own a 500 and am proud as new father is of his son. I also own a 72 124 Spider I purchased new in the fall of 1972. The MultiAir is at 4500 miles now and just keeps getting stronger. It's a 5 speed and that tranny really shows off what you mention. The lack of "lug" gives the stick a very managable feel in city driving; not having to down shift constantly. I do have oil questions however; access to the oil filter, drain plug and how much does it hold?
Loving this car and heading for another one as soon as the $$$ show up.

Thanks fot the kind words. Sorry for the delay getting back to you, the storm in the northeast knocked me offline for several days!

Does anyone know what the valve lift is on the multiair engine? The article mentions cam lob lift but this will be mechanically/hydraulically multiplied to give the valve lift. Thanks