Crash test results for the European Fiat 500X were just released by Euro NCAP, the organization that assesses the safety of new cars in Europe. The Fiat 500X received four stars, just missing a five star rating. Recently, Euro NCAP has included crash avoidance technology in their assessment and that has significantly altered the meaning of the stars; this renders any comparison to previous year's ratings not comparable. Now to get a five-star crash rating a car has to be equipped with the most advanced collision avoidance equipment - normally reserved for high-end vehicles.

One can infer that a car currently receiving a four-star crash rating from Euro NCAP would be arguably equivalent to receiving a five star rating prior to 2014. 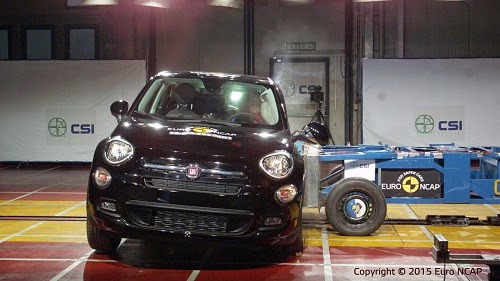 The European Fiat 500X received good marks on Adult and Child Occupant Safety but was let down on the Safety Assist assessment. As with other cars in the Small MPV Class, autonomous emergency braking (AEB) is optional, however, because Fiat doesn't believe it will be fitted to most cars, its higher-speed functionality was not included in the assessment and the 500X received zero points for it.

Interestingly, the top rated VW Golf Sportsvan AEB system is also optional, but it was included in its assessment. If it weren't, the 500X would be the top rated car in its segment. You can read about the testing protocols here on the Euro NCAP website.

Comments on Adult Occupant
The passenger compartment of the 500X remained stable in the frontal offset test. Dummy readings indicated good protection of the knees and femurs of the driver and passenger. Fiat showed that a similar level of protection would be provided to occupants of different sizes and to those sat in different positions.

Tests done on the front seats indicated a good level of protection against whiplash injuries in the event of a rear-end collision. A geometric assessment of the rear seats indicated marginal whiplash protection. An autonomous emergency braking system is available as an option. As it is not standard equipment, its performance at the low speeds typical of city driving was not assessed. 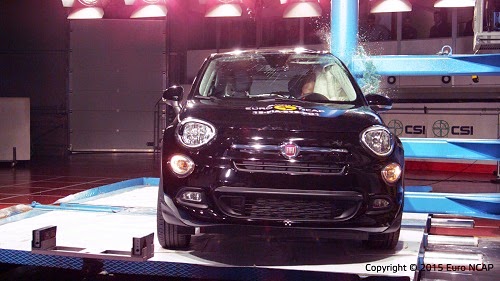 Comments on Child Occupant
The 500X scored maximum points for its protection of the 1½ year dummy in the dynamic tests and lost only a fraction of a point for the 3 year dummy, for chest acceleration slightly over the good performance limit. Both dummies were sat in rearward-facing restraints. In the side impact, both were properly contained within the protective shells of their restraints, minimising the likelihood of head contact with parts of the car interior. The front passenger airbag can be disabled to allow a rearward-facing child restraint to be used in that seating position.

Clear information is provided to the driver regarding the status of the airbag and the system was rewarded. All of the child restraint types for which the car is designed could be properly installed and accommodated in the vehicle. 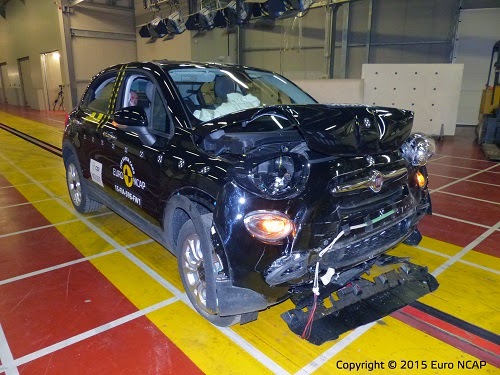 Comments on Pedestrian
The bumper provided predominantly good protection to pedestrians' legs. Protection of the pelvis area was good and the car scored maximum points in these tests. The bonnet surface provided predominantly good or adequate protection to the head of a struck pedestrian, with poor results recorded along the edge of the windscreen and on the stiff windscreen pillars. 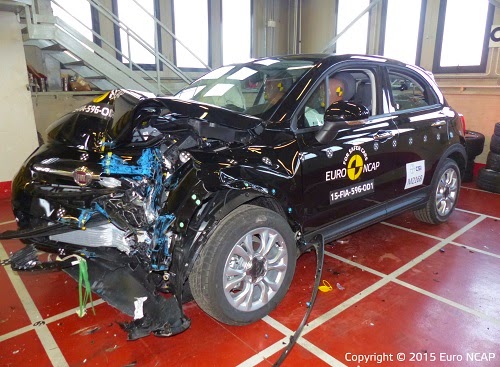 Comments on Safety Assist
Electronic stability control is standard equipment, as is a seatbelt reminder for the front and rear seats. The optional autonomous emergency braking system operates from low speeds, typical of city driving, to the higher speeds normal for driving on the open road.

However, Fiat does not expect most cars to be equipped with the system so its higher-speed functionality was not included in the assessment. A driver-set speed limitation device is standard equipment and met Euro NCAP's requirements for systems of this type. A lane departure warning system is available as an option. As it is expected to be fitted to most cars sold, it was included in the assessment.


Discuss on the Fiat 500X Forum

Source: Interpreting the star ratings
Posted by Fiat500USA.com at 12:58 PM