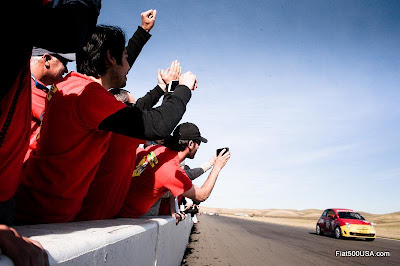 Team Rimicci Corse's Fiat 500 Abarth made its racing debut at the National Auto Sport Association (NASA) 25 Hours of Thunderhill endurance race last week. The Fiat 500 Abarth driven by Johnny Kanavas finished the race despite a roll over that occurred during the practice session. This is a testament to the car's strength and the team's determination and is even more noteworthy because 25 Hours of Thunderhill is a tough race and is listed as the longest endurance run in the world.

Team Rimicci Corse and their Fiat 500 Abarth will be competing in the Pirelli World Challenge Championships Touring Car Class next year. We'll follow their progress here, so stick around!

Below is the press release with the details of last weeks race:

December 11, 2012 (Northridge, Calif.) - After racing for 381 laps on track - and racing for a few hours in the back paddock - Rimicci Corse saw the no. 58 Fiat Abarth take the checkered flag at Sunday's USAF 25 Hours of Thunderhill in Willows, California.

It was a long road to the finish for the team, taking part in the event for the first time. After a roll over on Thursday during practice, the team had the car repaired and ready for practice and qualifying on Friday. Kanavas would qualify the car in 54th position overall in the 70 car field.

The work was not done for the team once the green flag fell on Saturday at 11:00 AM. After Kanavas made up several positions at the start of the race, Rimicci would bring the car behind the wall with a failed clutch. The team would repair the car and get it back on track, and would work miracles throughout the night as the car would suffer other mechanical failures. However, with each part failure, the team would affect repairs and the little Abarth would return to the track. 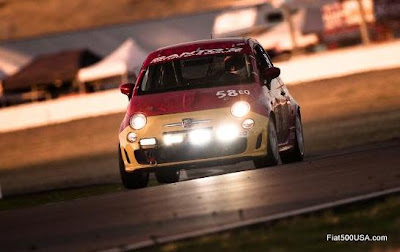 "We brought the car to Thunderhill to put it through a real test," said Rimicci. "And we did! We learned a lot about our car and what we need to work on and improve for next season. The guys wouldn't quit and kept us in the race. Along with Brian Mezger, we had my dad, Santo Rimicci, and my cousin, Gianfranco Masdea as our crew, and of course my brother driving the car as well. Watching the car cross the finish line was one of the greatest feelings I've ever experienced. I'm really thankful for everyone who supported us - our crew, friends, family, and the guys at King Electronics. I'm also really thankful my family didn't kill me after I rolled the car."

Nursing home a wounded car, Kanavas would take the checkered flag for the team, completing his eighth 25 Hours of Thunderhill. As the car rolled down pit lane at the end of the race, several teams applauded the car and the team for making it to the checkered flag. Throughout the weekend, the team was overwhelmed by the support it received from the teams, drivers, and officials of NASA.

"It was a very special moment to see that checkered flag," said Kanavas. "To take a car that rolled over in practice and finish a 25-hour race is truly an accomplishment to be proud of. The amount of work the crew and drivers had to put in was incredible. The car was never 100% from the beginning of the race, but when it was good it was extremely fun to drive, but I really went into really conservation mode to make it home. We had one goal and that was to finish this brutal race and despite many obstacles, we did it just that. I want to thank Rimicci Corse for the opportunity to work with such a fun and focused team that took the first Fiat 500 Abarth in America to its first 25-hour endurance finish."

Fabrizio Rimicci, taking part in his first 25 Hours of Thunderhill, was only able to get limited practice in the Abarth before getting in the car after darkness had fallen in the race. 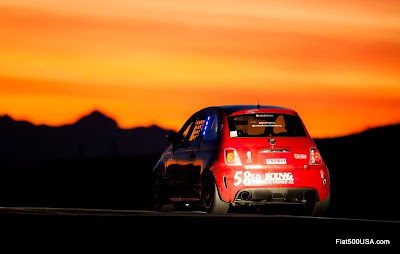 "It was a little bit scary driving onto the track for the first time at night," said Rimicci. "I only had a few laps in practice but the light bar on the front of the car gave us really good visibility, and having Brian on our radio really helped with traffic and getting me up to speed. Even through all of the challenges the team had, it was an incredible experience and a great feeling to see our Abarth make it to the checkered."

For his part, Olivares - also a rookie in the 25 Hour - could barely believe his eyes when the Abarth took the checkered flag.

"The Italian team is just too stubborn to quit and that Abarth refused to die," said Olivares. "But as long as they were willing to keep working, we were going to keep driving. It was really inspiring to see them work for literally four days in a row to keep the car on track. The four of us in the car really wanted the car to make it to the end for their sake."

Rimicci Corse will make its debut with two Fiat Abarths in the Pirelli World Challenge on May 17-19, 2013 when the series visits the Circuit of the Americas in Austin, Texas.

Rimicci Corse
The Rimicci's are an Italian family who will compete in the Pirelli World Challenge Championships with Fiat 500 Abarths. For more information, visit rimiccicorse.com. facebook.com/rimiccicorse, and follow the team on twitter (@rimiccicorse).