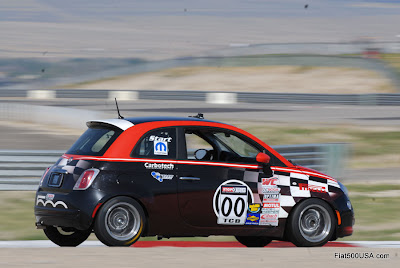 Fiat 500 racing driver Jonathan Start is close to winning the World Challenge Touring Car B-spec drivers' championship this weekend. The Fiat 500 is also in the running to grab the manufacturer's title, so keep your fingers crossed. Below are the details and a link to watch the races. Good Luck Jonathan!

Fiat 500 Driver Jonathan Start Carries Point Lead into 2012 Season Finale Weekend
August 23, 2012 , Auburn Hills, Mich. - The 2012 season championship is on the line this weekend at Sonoma, Calif., in the World Challenge Touring Car B-spec series. Michigan-native Jonathan Start is looking to wrap up the B-spec title at the California road course in the No. 00 Fiat 500.

Start carries a 41-point advantage into the weekend as B-spec competitors will challenge the 12-turn, 1.99-mile road course three times in two days – a pair of 25-minute timed events separated by a 15-minute break on Saturday and a 40-minute timed event on Sunday will complete the nine-race 2012 schedule.

“This is the first time I’ve raced here at Sonoma,” Start said. “We’re looking for strong finishes in all three races and hopefully we can bring home the championship. That doesn’t mean that I’m not going for the top spot. I’m going to push hard.”

In April, Start got the inaugural season of Touring Car B-spec competition off to a fast start by posting back-to-back wins at Miller Motorsports Park in Utah and followed up with a fourth the next day. The series traveled across the border in June to Canada (Canadian Tire Motorsports Park, Bowmanville, Ontario) for the second event weekend where Start posted three third-place finishes. 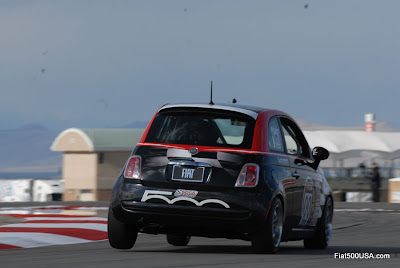 “The Fiat 500, it’s been phenomenal,” said Start who is racing his first season in the pro ranks “The performance and durability has been unbelievable. I really enjoyed racing this category, and I hope the B-spec series takes off. It’s just so much fun to race this fast Fiat 500.”

Modifications for racing in the series are limited to shocks, springs and the required safety equipment.

“This inaugural season of B-spec competition is a testament of the solid engineering and durability behind the Fiat 500,” said Tim Kuniskis, Head of the FIAT Brand for North America, Chrysler Group LLC. “We’re looking forward to the exciting conclusion of the Pirelli World Challenge season this weekend and we wish Jonathan the best of luck as he focuses on bringing home the championship.”

SRT Road Racing Manager Gary Johnson is looking for a continuation of the high performance level at Sonoma.

“The Fiat 500 should be very strong at Sonoma this weekend,” he said. “Jonathan had a very quick start this season with two wins at the opening weekend at Miller Motorsports Park and has been competing extremely hard ever since. He’s leading the driver championship point standings and with some good results this weekend in front of his family members, including his father (Tom), Jonathan should be able to bring home the first World Challenge B-spec Championship for the Fiat brand. Our team has a lot of faith in Jonathan to go out and run the final three races while being totally focused on the championship goal.”

This weekend’s Pirelli World Challenge Series’ Touring Car B-Spec races from Sonoma will be streamed live online at world-challengeTV.com. Live audio from Friday’s qualifying session will be available at the same site at 12:15 p.m. (Pacific time).

The coverage continues Saturday with live video from the back-to-back B-Spec races starting at 4:10 p.m. (Pacific time). There’s a 15-minute break between races. The final B-Spec race of the season and third of the weekend is set for Sunday at 9:50 a.m. (Pacific time).

Chrysler Media Press Release
Posted by Fiat500USA.com at 2:31 AM