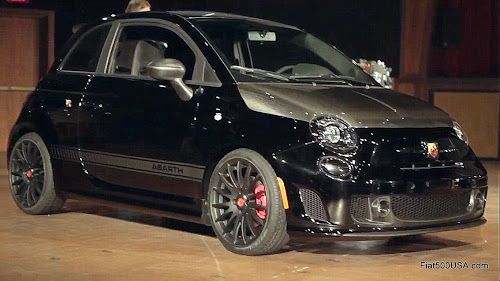 The Fiat 500 Abarth Venom features an engine that is boosted to over 200 HP and weighs in a little over 2,000 lbs. Upgraded brakes and a suspension that is lowered 2 plus inches help in containing all this power. According to the Italian Magneti Marelli engineer I talked with, the performance is 'quite nice', which I took as a suave way of saying unfreakin' believable. 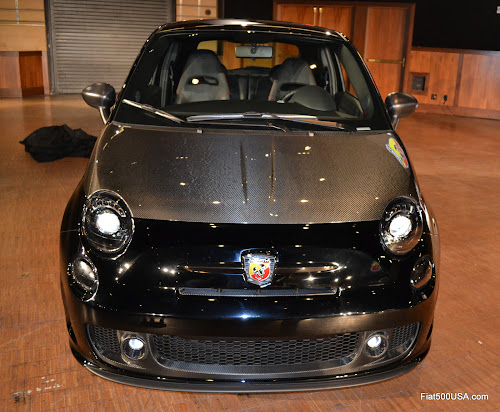 Magneti Marelli supplies the original suspension, exhaust, lighting, instruments and fuel injection system for the European Fiat 500 and 500 Abarth. In addition, through its aftermarket division, Magneti Marelli supplies parts for the racing 500 Abarth Asseto Corse and a host of other performance parts and accessories. Now that the Fiat 500 Abarth is here, and the regular Fiat 500 sales are in full swing, Fiat USA is tapping Marelli's wealth of knowledge and parts bins. 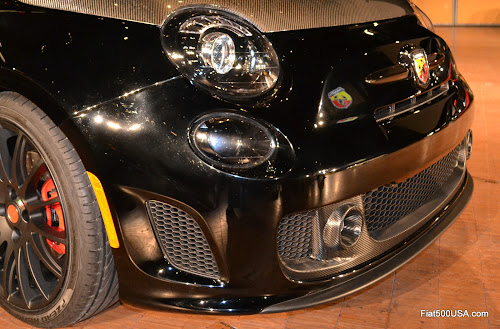 It is important to note that the Fiat 500 Abarth Venom is not a model that will be produced, but showcases accessories for the Fiat 500 and 500 Abarth models that should be available within the upcoming months at your local Fiat Studio.


Some of these parts will need to be tweaked for US consumption, but FIAT USA has given the go ahead to bring a variety of accessories over to the US for distribution through MOPAR channels. Fiat 500 and 500 Abarth accessories will be added over the coming months and expect to see the bulk of them by this June. 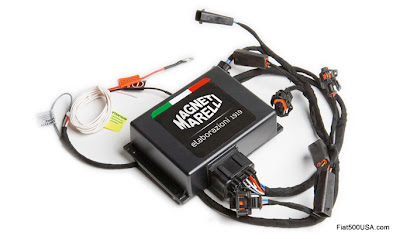 The Fiat 500 Abarth Magneti Marelli Boost Controller is fully plug and play, with OEM connectors (which makes sense because they supply the original electronic engine control units in Europe). It integrates into the electronic control system and increases horsepower and engine response. There are safeguards built in as the Boost Controller monitors engine sensors and will reduce power in certain situations, for example; if the engine should overheat. This image is of the European version which adds approximately 27 HP to the 500 Abarth. The US version is still under wraps.

The control module is designed for sporting use and for maximum satisfaction and safety:


One US company that already has stocks of Magneti Marelli products available for the Fiat 500 and Fiat 500 Abarth is 500 Madness. They have been a Magneti Marelli dealer before the 500 was even available here in the US and have expertise on what fits and what doesn't. Make sure you check out their site. 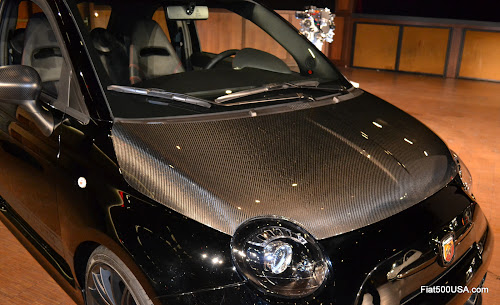 
More About Magneti Marelli
Magneti Marelli is well known in the racing world and supplies parts and electronics to Formula 1 and World Rally Championship racing teams from all over the world. With 2011 revenues of $7.8 billion and approximately 35,000 employees, Magneti Marelli has a reputation for producing advanced automotive systems and components. The company has 77 production facilities, 11 research and development centers, and 26 application centers in 18 countries. 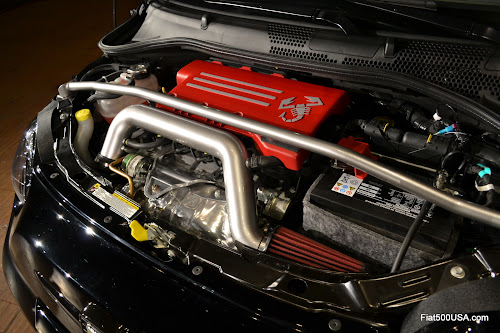 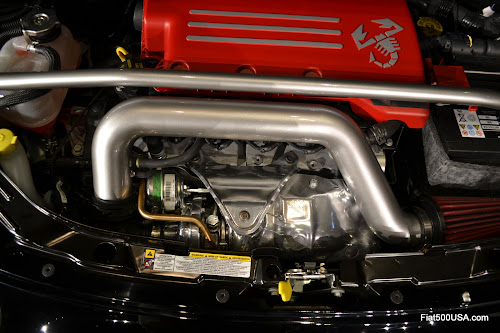 The 2012 Fiat 500 Abarth uses a Garrett GT1446 tubocharger, the same turbo that is used in the Abarth R3T racecar. For the Fiat 500 Abarth Venom, the boost has been turned up and a blow-off valve added, bringing the car to over 200 HP. 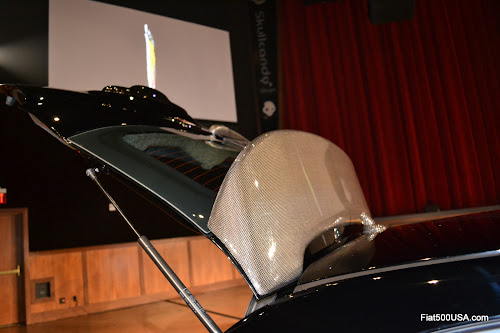 
Magneti Marelli developed the world's first mass-produced full-LED headlamp for installation in the Audi R8 and is an OEM supplier to the Volkswagen Group (VAG). 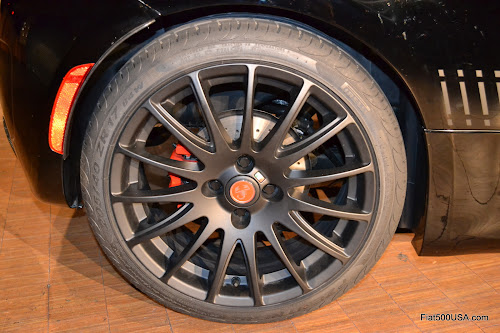 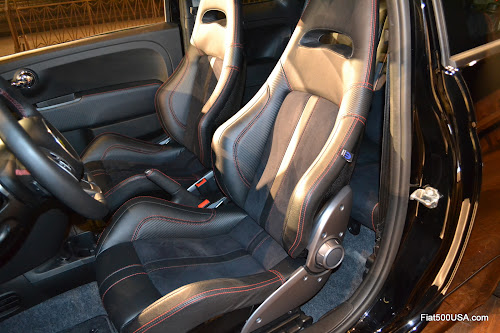 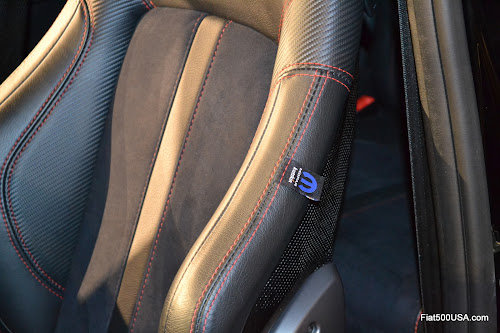 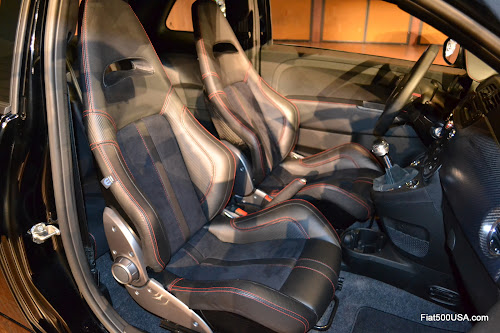 Tim Kuniskis, Head of Fiat Brand North America, had the Sabelt seats in the Fiat 500 Abarth Venom lowered a bit to give the car an even sportier feel inside. 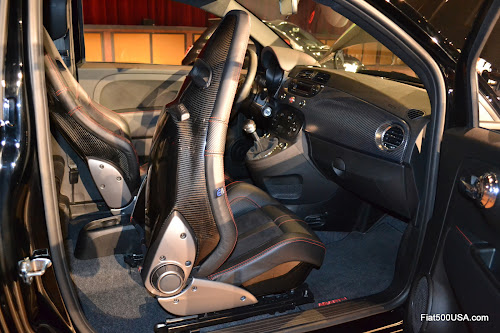 In Europe, these seats were introduced as “Abarth Corse by Sabelt” and made their debut being installed on 200 Abarth 500s used as courtesy cars by European Ferrari dealers. 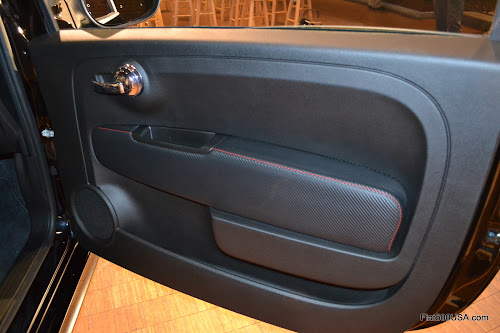 Difficult to tell in this photo, but the armrests have a "carbon fiber" like pattern. 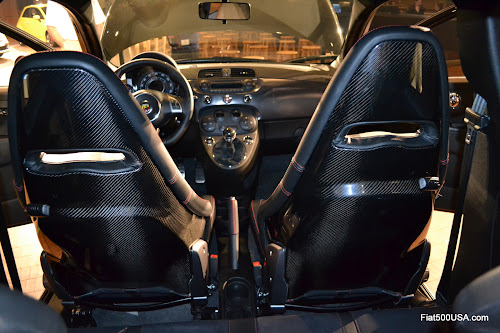 The Sabelt seat backs in the Fiat 500 Abarth Venom are done in an optional carbon fiber. Standard Sabelt seatbacks are made from a resin that is left in its natural color of off white. 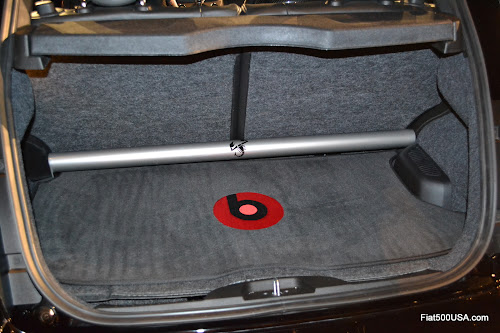 Keep an eye out for Beats Audio equipment in the 2012 Fiat 500 Abarth accessories lineup. 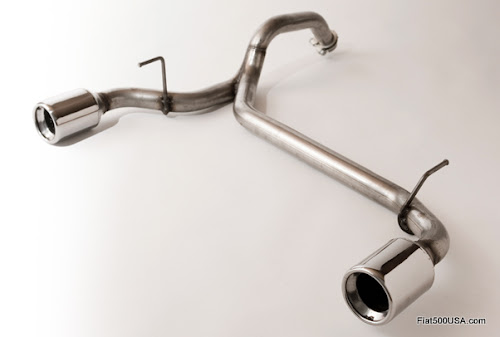 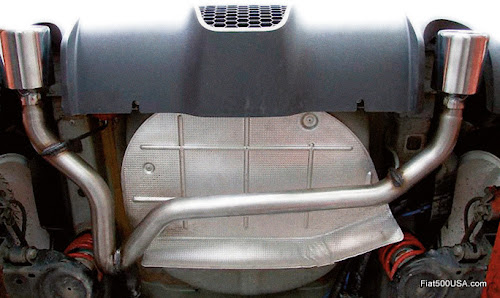 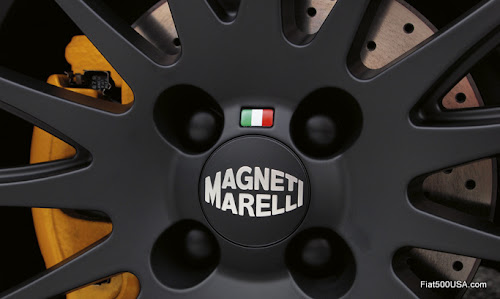 Follow the Fiat 500 Abarth Venom Discussion on the Forum

With thanks to: Magneti Marelli Aftermarket NA, 500Madness
Posted by Fiat500USA.com at 2:19 AM

Hi! Do we know what model of BOV was installed on the Venom?