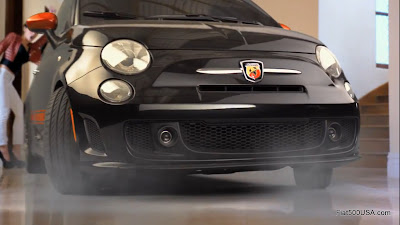 The "House Arrest" commercial features the poster boy for bad behavior, Charlie Sheen, racing a Fiat 500 Abarth around inside a mansion filled with groups of partiers. The video went viral on YouTube and within a week of its upload, had over 1 million views.

“This commercial was designed to generate brand awareness and capture interest for the Fiat 500 Abarth in a manner that is intended to be edgy and fun. We are overwhelmed and thrilled with the interest generated for this spot and we are excited for its debut on evening and late night programming.”

Highlights of Olivier François speech at APA. Tim Kuniskis also talks about what the Jennifer Lopez ad campaign did for the brand. You may be surprised...

Tuesday, Olivier François spoke at an Automotive Press Association luncheon in Detroit and gave an overview on Chrysler and Fiat marketing concepts.

The objective, he says, is to sell "cars through a brand" instead of selling a brand through its cars. François recalled first arriving in the Motor City in 2009 and being struck with automotive advertising focused on features and pricing: "It seemed like Detroit was obsessed with cupholders and zero percent APR."

I say if any car company can pull this off it is Fiat, because few car manufacturers can call upon such a rich heritage and evoke the emotional appeal as the Italian car maker; the owner of Ferrari, Maserati, Alfa Romeo and Lancia.
Posted by Fiat500USA.com at 12:58 PM