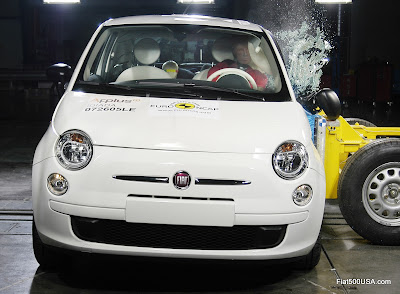 The Fiat 500 has been tested by every major safety organization from around the world, and has always received outstanding results except for a single test done by the NHTSA. Euro NCAP, Australian NCAP and the IIHS rate similar side test results as excellent.

The Fiat 500 is known around the world for its impressive safety record. In Europe, it was the first car of its size to earn a 5 Star safety rating from Euro NCAP. In the US, the Fiat 500 was just awarded the Insurance Institute for Highway Safety (IIHS) highest honor - a Top Safety Pick rating. With all this in mind, the recently announced National Highway Transit Institute (NHTSA) crash ratings for the Fiat 500 comes as a surprise.

NHTSA front barrier test
In the NHTSA crash tests, the Fiat 500 performed well in 2 out of the 3 tests, receiving 4 Stars in both the front barrier and rollover tests, however, in the side impact test the car scored just 2 Stars. This gave the 500 an uncharacteristically low overall score of 3 Stars.

This is quite a baffling result, because the Insurance Institute for Highway Safety (IIHS) just tested the Fiat 500 and the car was awarded its Top Safety Pick rating (read here). In the IIHS test, the car was awarded a 'Good' rating - their highest score. Traditionally, the IIHS crash tests are considered more severe and real world than the NHTSA tests. Here are the differences:

Frontal
In the NHTSA's frontal tests, cars are crashed into a solid barrier at 35 mph, representing a head-on collision of two cars of similar size and weight each moving at 35 mph. This tests the effectiveness of the restraint system with star ratings given based on the chance of receiving a serious injury.

Side Impact
Tests from both organizations simulate FRONT-INTO-SIDE crashes. In the tests, vehicles are struck by a moving barrier.

The NHTSA test is done with a 3,015 pound deformable barrier representing the front end of a midsize passenger car moving at 38.5 mph.

IIHS uses a 3,300 pound deformable barrier in the shape of the front end of a fullsize SUV traveling at 31 mph. The NHTSA doesn't assess the risk to people’s heads when their vehicles are struck by high-riding ones.²

The NHTSA also conducts another side test that the IIHS doesn't called the Side Pole Test. 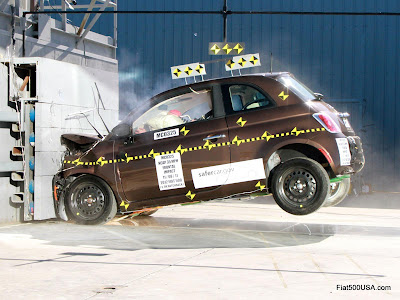 The Fiat 500 scored an overall 4 Stars in the NHTSA front impact test. Breaking down the rating, we see the driver scored well with 4 Stars, the passenger receiving 3 Stars. The passenger score is lower than expected, but looking at the pre-test picture may give you a clue to the score. The passenger seat looks unnaturally close to the dashboard. In contrast, Euro NCAP guideline for the passenger seat requires it be adjusted in the same position as the driver's seat.³ 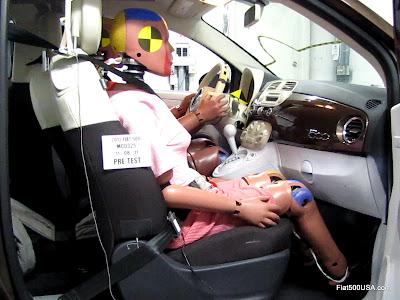 Although this seat is adjusted according to test protocol, most will agree it is not in a natural position for most human beings this size. Would sitting too close to the dashboard effect the results? What do you think... 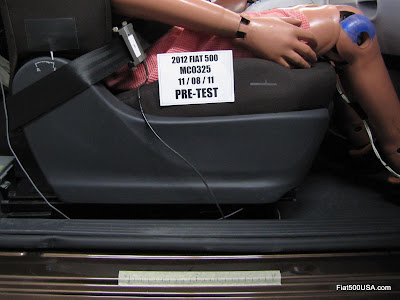 Notice how close the passenger's knees are to the glove box. Euro NCAP test procedures call for the passenger seat to be adjusted to the same position as the drivers. Compare this to the image below... 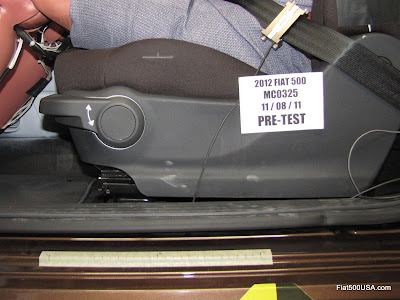 The Fiat 500 scored 4 Stars with a No-Tip rating. This rating is determined by a mathematical calculation based on measuring the vehicles height and center of gravity, etc., but also with a dynamic test.

This is an interesting test. The dynamic test involves a fishhook maneuver to represent an obstacle avoidance situation. With the vehicle traveling at 35-50 mph, the steering wheel is turned 270 degrees in one direction, then 540 degrees in the other direction, both within about one second. Instruments on the inside wheels measure if the wheels lift off the pavement during the maneuver. If both inside tires lift at least 2 inches, the vehicle is considered to have tipped up. If a vehicle doesn’t tip at 35 mph, it is run again at 40, then 45 and finally 50 mph. If it doesn’t tip at all, it is listed as “No-tip.” ** 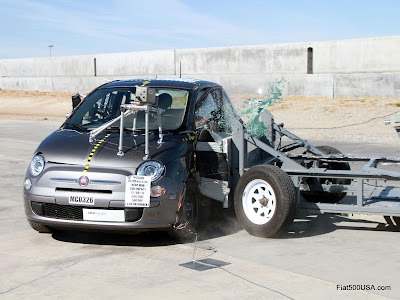 NHTSA side crash test
In the Side Impact tests, the Fiat 500 driver's seat earned a rating of 5 Stars, however, the rear passenger earning only 2 Stars brought the overall rating down to 2 Stars. The NHTSA has not made public any specific details other than the star ratings, so we don't know exactly what caused these results.

What we do know is that, in the IIHS side impact tests, the 500 earned their highest rating of "Good."

Injury measures:
Driver — Measures taken from the dummy indicate that a fracture of the pelvis would be possible in a crash of this severity.

Rear passenger — Measures taken from the dummy indicate a low risk of any significant injuries in a crash of this severity.

Head protection:
Driver — The dummy’s head was protected from being hit by any hard structures, including the intruding barrier, by a side curtain airbag that deployed from the roof.

Rear passenger — The dummy’s head was protected from being hit by any hard structures, including the intruding barrier, by a side curtain airbag that deployed from the roof.

The current lack of documentation by the NHTSA on the test and the strikingly different results in similar tests have spurred a lot of questions and speculation on enthusiast sites.

The below is taken from a thread on the Fiat 500 USA Forum and represents a typical thought on the situation:

"... I find it very unusual that the Fiesta was tested by NHTSA, had a dummy in the rear experience a lower spine acceleration of 87 times the force of gravity (5g's above their threshold rating) and STILL received a FIVE STAR side impact rating for that passenger. Say wha?


I'm also saying I find it highly unusual that the 500 scored extremely well in IIHS testing and poorly in NHTSA whereas I would have expected to receive similar ratings in both tests as did the Fiesta. The radically different scores in similar testing is very odd to me." - author Felnus, member of Fiat 500 USA Forum.


(Click here to read the whole thread)
My observation
The Fiat 500 has been crash tested by independent safety organizations from all over the world, and in each and every test- all the front end, front end offset, rollover, rear impact, roof crush, and side impact tests - the Fiat 500 received a good to outstanding result except for this one NHTSA test in this one seating position.

Development of the Fiat 500, like all Chrysler Group LLC vehicles, makes safety and security a priority. In fact, the Fiat 500 features more than 35 safety and security features including: driver and front-passenger advanced multi-stage air bags, driver's knee air bag, full-length side-curtain air bags and standard seat-mounted side pelvic-thorax air bags, all to offer enhanced occupant protection to all occupants in the event of a collision.

In addition, the company strives to continuously improve vehicle performance for third-party tests. We do know that the 2012 Fiat 500 has been named a "Top Safety Pick" for 2011 by the Insurance Institute for Highway Safety (IIHS). The IIHS recognizes vehicles that demonstrate "good" performance in front, side, rollover and rear crash test evaluations performed at its Vehicle Research Center.

*Beginning with 2011 model year vehicles, NHTSA began using new test dummies and different injury criteria for the side impact test, so ratings are not comparable to previous model years. The agency also added a new test that simulates a side impact into a pole. Previously, 5 Star ratings were easy to come by via the old NHTSA testing criteria.

"...It's expected that many cars that had been earning five stars will earn only three under the new system. That's because NHTSA is now factoring in more injury parameters, has added more tests, and is including data from dummies representing a small adult female instead of just an average-sized adult male..." taken from Consumer Reports.org, "Understanding Test and Ratings"