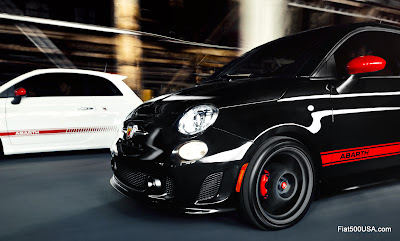 For those who witnessed the event, there is no doubt that the unveiling of the 2012 Fiat 500 Abarth was the debut of the Los Angeles Auto Show. The powerful image of the Abarth Scorpion and historic significance of the marque created an excitement and energy that was palpable to the enthusiastic Media. 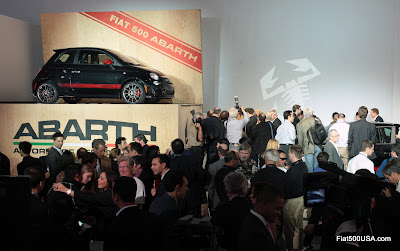 As it was an unveiling, we were given most of the relevant information; however, some information was not on the table. For example, you'll see 'estimated horsepower' - this is due to the fact that final horsepower certification is still pending. Also, the cars are currently still in pre-production form and little changes / adjustments may occur. It is one of the reasons you can't yet go onto the Abarth site and configure your car. That's the reality of how this stuff works.

Arguably the most asked question US Abarth fans have that was not addressed is: "what will the pricing be?"

What I can tell you from well placed sources is that the 2012 Fiat 500 Abarth will be priced competitively under $25,000. The best estimate of when we'll find out the official figure is sometime after the first of the year.

Stick around, this is getting interesting!

under 25k with essseessseses HP (:

The "equivalent" models as I see them are:

Fiat might get a few true enthusiasts to fork over 25K for the Abarth but the sales will quickly dry up. I love my 500 Sport and will almost certainly purchase the Abarth this Spring - I will not pay $25K though. Remember, the base POP is $15,500 - adding the upgrades on the Abarth is not worth $10,000 IMHO - now when an esseessee version is released which I predict will be in September/October as a 2013 model, that will probably have specs to justify a $25,000 entry fee. We'll see..........

why get one when you can get a loaded scion tc for the same price?

Anything over 22k would be a fail. I would love to trade our sport in on an Abarth.

$25k is rather dear, topping larger sports models of higher HP/displacement. I would love one, however. The big question I have is will FIAT ever offer the higher-HP drivetrain on lower models as an option. I would prefer a slightlty cheaper model, with a turbo engine as a standalone option. The Mini S turbo is $23k and hopefully FIAT will seriously undercut that with the Abarth 500.

guys keep in mind its a purest car...the mini cooper is not...sure you can track it but lets be real... and the European abarth is faster than the cooper S....sooo and it handles better....and in europe it is cheaper too...guys use the European price points as rough ideas. sure it wont be the same its not the same car but it will be close. so in a nutshell a cheaper faster mini cooper that dosent make you feel like a fruitcake that hugs trees.

Can't wait for the Abarth! Totes gettin one

hopefully if we keep saying $21,500, fiat will get the picture. I cant spend more on the abarth than a fiesta st. sad, but true

A scion? Your a moron.
In 15-20 years nobody will know what a scion is anyway.

How old do you think the 500 heritage is, you must not be more than 30 years old, and without any culture.

Fuuly load the Mini S and fully load your Abarth, then compare the prices. A base Abarth has more than a base Mini S. Check the specs. I want the Abarth and an esseesse addition of 40 more HP

At the scion commenter....weren't you also one of the "real customers" who said that a Hyundai was no different on the inside than a Mercedes? LOVE YOUR SHOW!!!

For the scion guy, yes your right the 2012 TC is cheep, quick, and good looks. and Im thinking of buying one, but everyone has a TC and the same for the mini. so getting an 500 abarth for the right price will be cooler and drive better than all of them.

now for the Hyundai it is "close" to a Mercedes. I know because Iv been in all of them and know how there made, both Hyundai and Mercedes.

Just bought my daughter a lounge cabrio.
What great fun. Had an original cinquecento long ago. Just as much fun and the new one is way better naturally.
will get an Abarth when they are available.

I'm hoping the Abarth comes in around $25k Canadian (or less). More importantly I want to know when mine will arrive. I've already got a buyer for my Cooper S.