Fiat 500 to show up in January 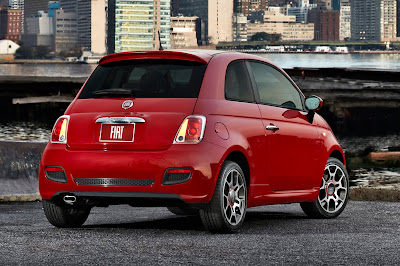 Fiat spokesman, Ariel Gavilan, has been quoted in the Florida newspaper, Sun Sentinel saying: "... every dealer should have a 500 on display by the end of January, or early February at the latest. 'The car will be built in Toluca, Mexico,' he said, 'so it's likely dealers that are closer, such as the one in San Diego, will have cars before the dealers up here in Detroit.'"

Mexico? Really? I thought this wasn't confirmed yet or at best was a final destination before being shipped to the U.S., but definitely not built in Mexico. I think Volkswagen has proven that Mexico is not a good idea. What was once a given purchase in my mind is wavering a bit. Quick, somebody convince me...

The assembly plant has been known for quite some time, and the Toluca plant has already been upgraded and retooled. I don't think Mexico is a bad idea, it helps keep the prices down and the car competitive. The Nissan Versa and Ford Fiesta are also assembled in Mexico. If you really like the Fiat 500 and its a good car, then it would seem like the assembly plant wouldn't be of much importance.

I'm not worried about WHERE it is built, just HOW it is built. Having owned 10 new VWs in 15 years, I've had German, Brazilian, and Mexican VWs. My "bad" VWs came from all three countries while my "good" ones were German and Mexican. Don't worry about where it was built.

So by your own admission, you have owned good VWs built in Mexico. Also, the Nissan Versa and Ford Fiesta have relatively good quality considering their price points. I am not convinced that there is anything inherently wrong with Mexican assembly. As you said, it comes down to how the car is built, and not where it is built. Keep in mind that even the European 500 is built in Poland, not Italy.

To the 4 Anonymous commenters,

First off, the Toluca plant is a Chrysler plant, and used to produce the PT Cruiser. Secondly, the 1.4L motor is being made at the GEMA plant up in Michigan I think, another Chrysler plant that they used in conjunction with Mitsubishi, of which Chrysler bought out to use for this engine and others from Fiat perhaps.

What you may be thinking of was the Brazilian made VW Fox, based on the Gol that was imported to the US between 1987-1993. It used a longitudinally mounted 1.8L 4 cylinder engine with Bosch CIS electro-mechanical fuel injection system, US models got the more complicated version with oxygen sensor for fuel management. Also, the quality of the car has largely with the company that builds the car and the staff that work in that factory, regardless of where it's made, as already said, the 500 is made at the Tichy Poland Fiat plant and its quality is superb from all accounts.

Try sitting in one. Sometimes the seats are very adjustable and you may fit just fine in the car. It may be a small car, but it does have good headroom.

There are reports of people up to 6'6" being comfortable in the car, so check one out if you get a chance.