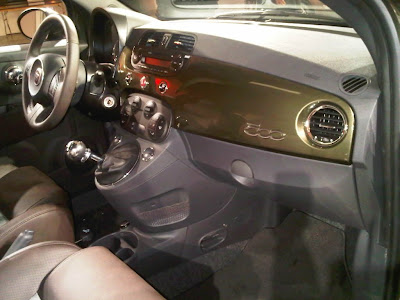 Here are the first interior shots posted of the new North American Fiat 500. There are some subtle differences between the NA 500 and its European cousin, like the locking glove box, shape of the window switches and the stowage compartment on the side of the console. 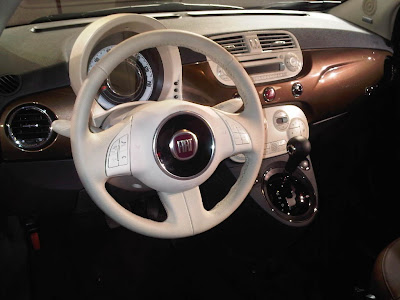 Big news here is the transmission. It looks like the European Dualogic has been replaced by a more conventional automatic. I had reported earlier on this blog that there were rumors the Dualogic would be replaced with an AISIN sourced 6 speed automatic. Judging by these pictures, that looks to be the case. We'll find out later in the day... 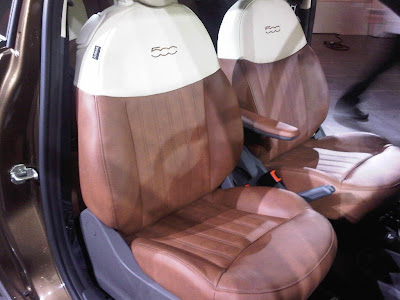 Interior with what looks similar to European Pop/Lounge seats. Note the armrest. Seats also appear to be wider. 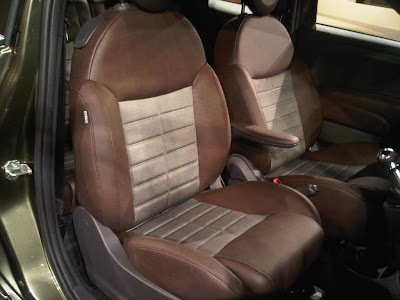 These heavily bolstered seats are in the 500 Sport and are also wider than European Sport seats. 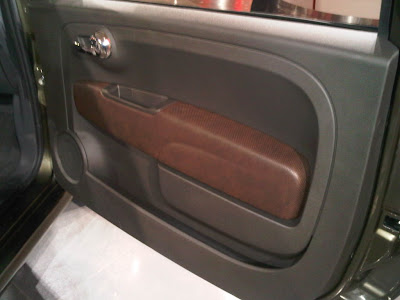 Related Posts:
Fiat 500 - Examining the differences between the Euro 500 and the North American 500

Again, thanks to Matt at Midwest Bayless for providing these photos.
Posted by Fiat500USA.com at 3:30 AM

Gah, Chris is gonna be busy the next few days :)

Thanks so much for this site.

I have now found out that Albuquerque will have a Fiat dealership..yea...and that Fiat now has their site up and running with a build your fiat...yea again...

but now I'm torn. One, still really want the Electric...but willing to get a non EV 500 and drive that for a couple of years...so the question is...keep the Prima or build my own. I really like the Blue, would be my first choice...but the Prima Grey is my second choice...so that is ok. I love the Lounge version...the high end tires are killer. So I'm leaning toward canceling my Prima and going Blue Lounge version (i like the Lounge front best, Sport second...Pop...icky front end.)

But I will wait a bit longer...If the Prima is coming much sooner than I can get a Lounge, well I will only be keeping this version for a short while...hate to lose too many months waiting on a Lounge. Also, if the Prima comes with a nicer stripe you can't get on any other version---I recommend to Fiat to make the Prima stripe just like the Abarth Stripe, but saying Prima...will make that version very special...well I might get the Prima in gray if it had that one of a kind stripe.

But leaning toward:
A) if the Electric is coming jan 2012...will cancel prima and wait.
B) if the Electric is coming Dec 2012...will either keep Prima if cool stripe (silly? probably) or if Prima coming in Jan Feb, but other models not here till May or so...or
C)Cancel Prima and get Lounge in Blue with cool top end tires (love the spokes, very european) if can get in March or April...willing to wait a couple of months between Prima to Lounge, but not 4 or more months.