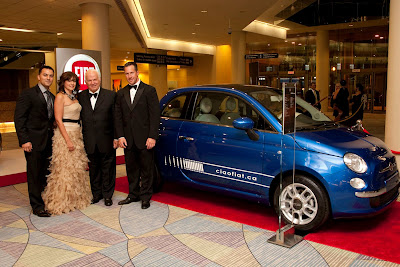 We knew the Fiat 500 is the darling of celebrities and has the style and presence to pull off being a loaner car for Ferrari dealers in Europe. Now add to that the ability to command big money.

Canada's first Fiat 500 was auctioned at Toronto's Venetian Ball and sold for $85,000. Proceeds from the Venetian Ball go to Villa Charities, a charity that cares for Italian-Canadian citizens in the Toronto area.

"The enthusiastic bidding for this iconic vehicle, and the fact that it sold for $85,000, underscore the excitement and interest the Fiat 500 has generated since Fiat's return to Canada was first announced," said Ed Broadbear, Vice President of Marketing - Chrysler Canada.

“Chrysler Canada and Fiat are proud to donate Canada's very first Fiat 500 to support Villa Charities," said Reid Bigland, Chrysler Canada President and CEO. “Thanks to the alliance between our two companies, the feeling of kinship with the vibrant Italian-Canadian community has strengthened and we are pleased to be a part of this wonderful event."

The "Numero Uno" is the first in a series of 500 limited edition vehicles which will feature a unique Prima Edizione sequential badge according to production order. The Fiat 500 Prima Edizione will be exclusively available in three colors: Bianco (White), Rosso (Red) and Grigio (Gray).

The modern generation of the Fiat 500 will be introduced in North America at the end of 2010 and will offer customers uncompromising safety, fuel efficiency from its 1.4-liter MultiAir™ four-cylinder engine, individualization options, quality and advanced technology. This vehicle combines the best of European engineering and Italian style. It also is tangible evidence of Fiat’s commitment to fuel efficient and environmentally friendly vehicles. In fact, Fiat has the lowest average CO2 emissions of any automaker in Europe.

Chrysler Canada, its employees and dealers have a long history of giving back to the communities where they live and work. Chrysler Canada's charitable giving supports a variety of organizations across Canada each year.

Since its formation in 1971 to provide culturally sensitive care for an elderly Italian-Canadian population, Villa Charities has extended its mandate to include support for individuals with intellectual disabilities and mental illness. Building on its rich Italian-Canadian heritage, and by living life with Italian passion, the Villa Charities family of organizations has grown to include Villa Colombo Services for Seniors, Columbus Centre, VITA Community Living Services, Mens Sana and Villa Colombo Vaughan Di Poce Centre. Recognizing its relevance across generations, Villa Charities is launching new initiatives to promote quality of life, health and wellness, youth engagement, the creation of new knowledge and investment in new technologies. For more information, visit www.villacharities.com.

Founded as the Chrysler Corporation in 1925, Chrysler Canada Inc. is based in Windsor, Ontario, and celebrates its 85th anniversary in 2010. Chrysler Canada's product lineup features some of the world's most recognizable vehicles, including the Dodge Grand Caravan, Jeep® Wrangler and Chrysler 300.

Chrysler Canada is a wholly owned subsidiary of Chrysler Group LLC, one of the world's leading automotive companies. Chrysler Group LLC, formed in 2009 from a global strategic alliance with Fiat Group, produces Chrysler, Jeep, Dodge, Ram Truck and Mopar® vehicles and products. With the resources, technology and worldwide distribution network required to compete on a global scale, the alliance builds on Chrysler’s culture of innovation – first established by Walter P. Chrysler in 1925 – and Fiat’s complementary technology – from a company whose heritage dates back to 1899. Fiat will contribute world-class technology, platforms and powertrains for small- and medium-sized cars, allowing Chrysler Group to offer an expanded lineup of fuel-efficient vehicles well-suited to Canadian customer needs.

huh, will canada's fiat 500's not have to be updated to meet differing safety requirements like in the US?

Thanks for the Canadian content. I predict Canada will buy a lot of 500s, especially if the TwinAir shows up. I hope the two seater convertible is still in the cards.

So, the reports are a bit confusing about the Prima series. Is there a separate group of 500 in Canada and another group in the US? The way things are worded it seems unclear.

I smell another Prima auction happening this weekend in Wash. DC as part of the big NIAF gala.

Rusty said...
huh, will canada's fiat 500's not have to be updated to meet differing safety requirements like in the US?

My take is that the cars will be NA cars, with some minor differences. The car shown is a stand in for the NA model.

peterjerome said...
Thanks for the Canadian content. I predict Canada will buy a lot of 500s, especially if the TwinAir shows up. I hope the two seater convertible is still in the cards.

Thanks goodness there are folks that love small cars here in North America, that's our only hope to get all the cool cars sold in the rest of the world, especially Europe;)

TK said...
So, the reports are a bit confusing about the Prima series. Is there a separate group of 500 in Canada and another group in the US? The way things are worded it seems unclear.

I smell another Prima auction happening this weekend in Wash. DC as part of the big NIAF gala.

I think there are going to be 2 Primas, a US and Canadian version. I'll look into it...

Remember at FFO cars 1-10 were spoken for (charity, etc.). Makes sense if they raffle a Fiat off at NIAF.

I've looked through my pics and it is very hard to tell the difference. I have technical drawings and they appear close other than the shade. Check out Flicka, Picaso and other picture hosting sites and see for yourself.

Fiat Brazil has a 500 with a fixed roof in their 500 configurator and you can see what the top kind of looks like:
http://www.fiat500.com.br/

was this one made in mexico ?

Hmmmm...I wonder what this means as to the value of those 500 pre-reserved US first editions? Dave #473