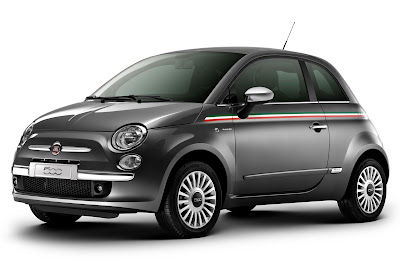 *For illustration purposes only. Not a Prima Edizione

Fiat 500 Prima Ediziones numbered 1 through 10 and number 500 were held in reserve by Fiat North America for charities, museums, etc.

The National Italian American Foundation (NIAF) is a non-profit organization dedicated to preserving and promoting the heritage and culture of Americans of Italian descent. The NIAF gala is one of the premier annual events in the nation’s capital, attracting more than 3,000 guests from the United States and Italy.

“Fiat North America is delighted to be a part of the National Italian American Foundation’s 35th Anniversary gala,” said Laura Soave, Head of Fiat Brand North America. “We are honored to auction a special edition Fiat 500 Prima Edizione, knowing that the proceeds will help benefit the foundation’s education and scholarship program.”

Chrysler Media
Posted by Fiat500USA.com at 8:42 AM

What price are the rest of the prima ediziones going to be I wonder ?

Anonymous said...
"What price are the rest of the prima ediziones going to be I wonder ?"

We'll have to wait and see. I'm thinking positive:)