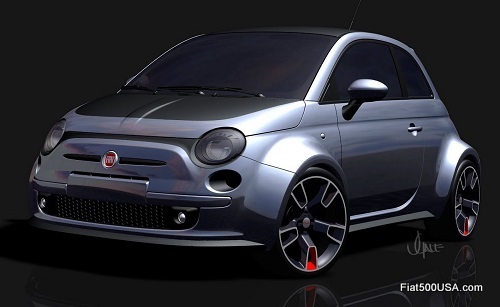 Chrysler has just released info on the hottest Fiat 500 seen in North America. This car is simply awesome! Here's the first picture and a description of the car... 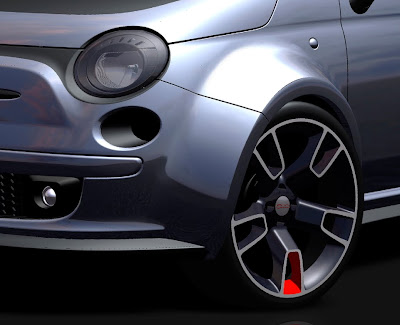 The concept car features a number of unique parts created by the Mopar Underground team, including a front airdam/lip, lower sill, spoiler, rear valance and brake ducts. The 2010 Fiat 500 features a lower ride height on 18-inch Alcoa wheels and flared wheel arches reminiscent of the Fiat 500 models that dominated race tracks in Europe back in the day.

The vehicle rides on Pirelli tires with a mean, wheels-out-and-down stance that is accentuated by a Dark Thunderbolt Gray exterior. The black roof, black hood, headlamp and fascia graphics tie the headlamps together. The lower “chin” of the Fiat 500 hooks up with a flare that surrounds the front wheel. A lower side sill, also in black, adorns the sides.

The interior is driver-focused, with a red seat and red door insert on the driver’s side, with piano-black accents on the instrument panel. The remainder of the interior is outfitted in a subdued black. The always-sporty Fiat 500 is bolstered with the power and performance that comes with Mopar parts. Mopar bolt-ons include a Mopar custom exhaust system that provides horsepower and torque gains and a Mopar strut tower brace that reduces body flex in the front end and improves drivability and handling. Two additional Fiat 500 vehicles will be on display in the Mopar Alley, outfitted with a full complement of Mopar parts and accessories. The all-new Fiat 500 will be available for ordering in the U.S. later this year in the Sport, Pop and Lounge models, followed by the all-new Fiat 500C (cabrio) in the spring of 2011. Courtesy Chrysler Media
Posted by Fiat500USA.com at 11:23 AM

Reminds me of the Scion iQ concept

Instead of just blacking-out the "whiskers" on either side of the Fiat badge (which just makes them look like downmarket black-rubber trim), I think it would have been both cleverer and sportier-looking to turn them into actual intake openings shaped just like the original whiskers.

This was the worst mopar alley at SEMA yet. They need to change it up because it just gets more and more boring. It used to be a place I would meet my friends and we would check out all the crazy car and racecars they brought. But now it has just turned into a boring thoroughfare. Just dead in there now. As far as the Fiat's, it feels like Mini came out with a new model. Everytime I see a Fiat 500, I could easily mistake it for a Mini. And hope this doesn't come out the wrong way, but as much as I want a new subcompact (I'm a 28 year old guy), the Fiat 500 feels like a chick car. Don't think I can get over that. Its like the car has the potential, but everytime I see it, something turns me off.