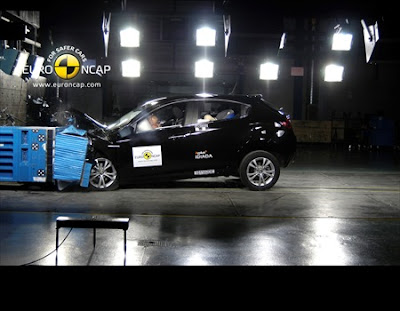 The Alfa Romeo Giulietta has achieved the highest safety score ever achieved by a compact car according to Euro NCAP, the organization that assesses the safety of new cars in Europe. Besides the Giulietta's 5 star rating, it has achieved an 87/100 score in its testing.

This innovated chassis (or platform) will form the basis for the next generation of compact Chrysler cars. Chrysler will first use this chassis (called the C-Evo) in the upcoming, redesigned 2012 Dodge Caliber and next in the mid-sized 2013 Dodge Avenger/ Chrysler Sebring (where the longer wheelbase version of this chassis will be called D-Evo).

Alfa Romeo's next use of the C-Evo will be in the upcoming Giulia series, due out in 2012 and slated to spearhead Alfa Romeo's return to the US market. The Giulietta, by the way, is scheduled to come to the US in 2014.

Now, we've heard a lot about how good the C-Evo chassis is and this news is another confirmation that the experts are right. This bodes well for Chrysler and Fiat fans in the US.

Below, we'll explore the crash results of the Giulietta, with the help of Euro NCAP and Fiat Group Press.


Frontal Impact takes place at 40mph (64 Km/h), 40% of the width of the car striking a deformable barrier. In the side impact, a mobile deformable barrier impacts the driver's door at 30mph (50km/h). In the pole test, the car tested is propelled sideways at 18mph (29km/h) into a rigid pole. 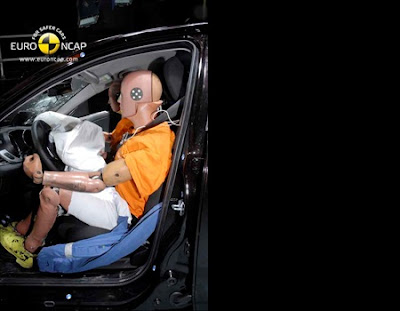 Adult occupant
The passenger compartment remained stable in the frontal impact. Dummy readings indicated good protection of the knee and femurs of both the driver and passenger. Alfa Romeo were able to show that similar protection would be offered to occupants of different sizes and to those sat in different positions. 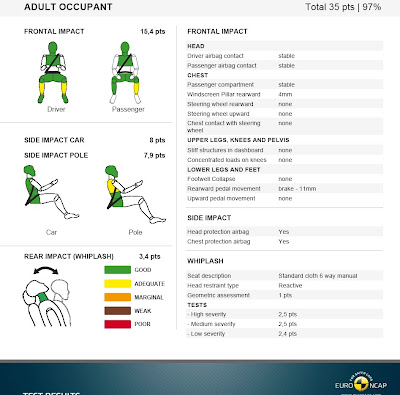 The Giulietta scored maximum points in the side barrier impact. In the more severe side pole test, good protection was provided to all body regions except the chest, where protection was adequate. A reactive head restraint (one which moves forward in response to the rearward movement of the occupant) provided good protection against whiplash injuries in the event of a rear impact 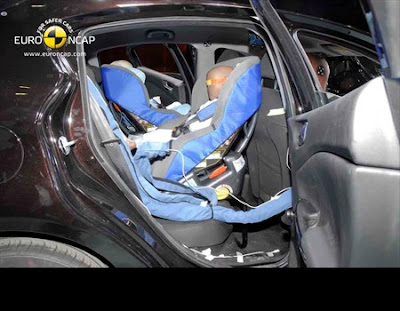 Forward movement of the 3 year dummy, sat in a forward facing child restraint, was not excessive in the frontal impact. Both dummies were properly contained by their respective restraints in the side barrier test. The passenger airbag can be disabled to allow a rearward facing child restraint to be used in that seating position. However, information provided to the driver regarding the status of the airbag is not sufficiently clear. 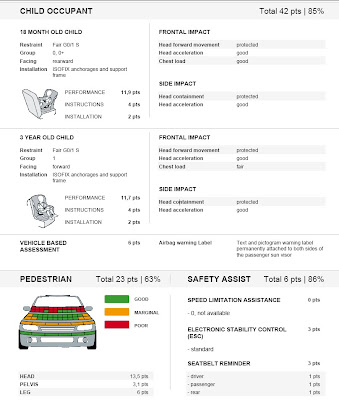 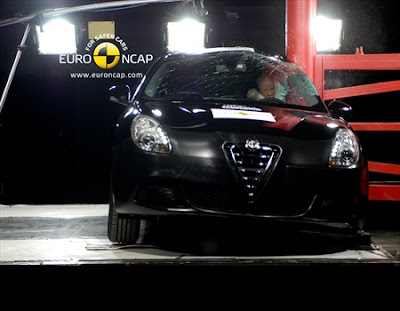 Safety assist
Electronic Stability Control (ESC) is standard equipment on all variants, along with a seatbelt reminder system for the front and rear seats.

Alfa Romeo Giulietta has been awarded the prestigious Euro NCAP five-star rating and an overall score of 87/100: an extraordinary result that makes it the safest compact ever. 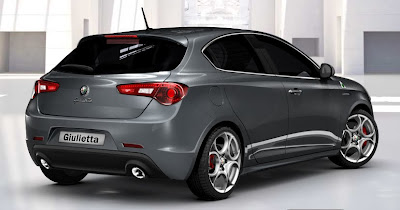 The rating is even more important considering that since 2009 Euro NCAP has adopted a new scheme composed of four areas of assessment, namely Adult Occupant, Child Occupant, Pedestrian Protection and a new area: Safety Assist. Injury avoidance and mitigation functions, such as seat belt reminder, ESP and speed limiter, are also rated.

Achieving a five-star rating will become increasingly tougher year by year (2009, 2010-2011, 2012). In this scenario, the rating achieved by the Alfa Romeo Giulietta (97% Adult Occupant, 85% Child Occupant, 63% Pedestrian Protection and 86% Safety Assist) means that the car will also have five-star rating in 2012 when the system will have reached maximum severity. 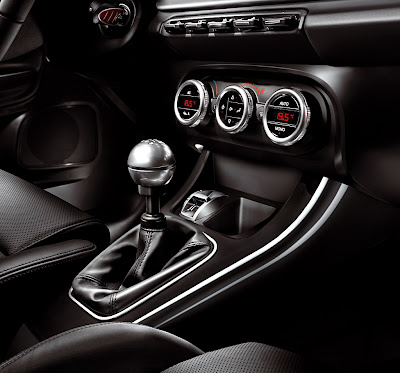 This major accolade yet again confirms Alfa Romeo’s special commitment to all aspects relating to the protection of all road users. The Alfa Romeo Giulietta was designed and built to obtain maximum passive and active safety performance.

Proof of this, for instance, is the adoption of the most advanced electronic dynamic control devices (for braking and traction): the Vehicle Dynamic Control system, which manages key functions, like Hill Holder, traction control and assisted panic braking, the MSR system, which prevents wheel locking when the throttle is released, the DST (Dynamic Steering Torque) system, Electronic Q2, which electronically “simulates” the presence of a self-locking differential, and the brand-new Prefill system, which alerts the braking system that the accelerator pedal has been released to decrease intervention time and consequently braking distance. 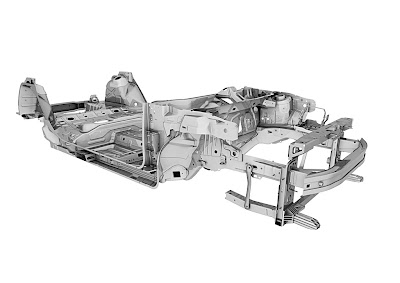 Thousands of hours of virtual simulations enabled the creation of the new “Compact” architecture – which is making its debut on the Giulietta – and the entire car using only four prototypes.

The quality of virtual design was later materially put to the test on the cars made at the Cassino plant by running two hundred tests on components and subsystems, more than one hundred Hyge slide shock test simulations and more than eighty crash tests (frontal impact, side impact, roll-over and shunting, taking various speeds, different types of obstacles and the need to protect occupants physically very different from one another into account). These numbers confirm the profound commitment to making the Alfa Romeo Giulietta one of the safest cars in Europe by containing the most advanced safety systems. 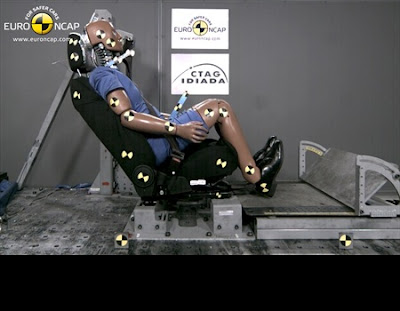 Total protection, in short, as evidenced by six airbags as standard (two of which Multistage), three-point seat belts with double pretensioners and load limit limiters and SAHR (Self Aligning Head Restraint), a new second-generation device built into the backrests of the front seats that moves the head restraints closer to the occupants’ heads in the event of a crash to lessen the effects of whiplash. Without forgetting the contribution to occupant and pedestrian protection provided by the body, the bonnet, the doors and the dashboard crossmember, in addition to the seats and steering column. 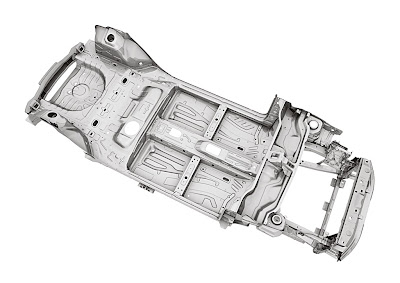 The efficacy of all these devices is maximized by a three load line front structure that guarantees structural uniformity and consequently uniformity of response in the event of frontal impact regardless of the type of obstacles or vehicle that the car crashes into. This is a breakthrough in partner protection, because the vehicle is less aggressive when crashing into the front or side of another vehicle, and in self protection, because the uniform deformation makes the retaining systems more effective regardless of the type of crash. 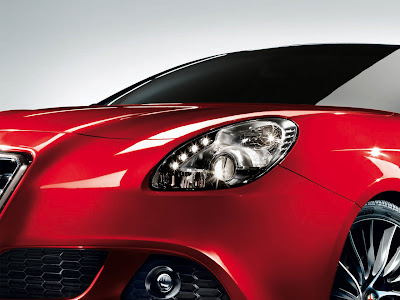 Finally, in the field of preventive safety, the Alfa Romeo Giulietta adopts headlamps with Daytime Running Lights that are automatically turned on when the engine is started – to meet a specific European standard that will come into force in 2012 – and LED tail lights, brighter than conventional bulbs, for extra safety.

Credits and sources: Euro NCAP, Fiat Group Press
Posted by Fiat500USA.com at 9:47 AM

How interesting! It will be interesting to see how many of these safety features carry over to the new Chrysler products, especially the aforementioned redesigned Caliber and the mid sized Avenger/Sebring twins when it arrives in 2013.

I can see the Giulietta working as is here in the US if anything as a successful model and this and the previous post on the crash tests themselves further proves that FIAT is serious in making fine cars at various price points.

Yes, Fiat's goal is to be best in class and that attitude is what they want to instill in Chrysler.

One bit of info to take away from the above post is that extensive use of simulations were used and only 4 prototypes were needed.

Fiat was able to bring the Giulietta (and MiTo)from concept to model launch in just 15 months, this means we may see new Chrysler cars a lot earlier than 2012. I'll go out on a limb and predict we'll see something new around this time next year.

I've read about Chrysler's extensive use of computer simulations and 4 prototypes but I think a bigger challenge than Chrysler's way of doing things is the attitude of the general public but you may well be right in that we might see new cars sooner than initially announced, I've heard that the Caliper was not axed, but will be redone, based on one of the Fiat et-al models instead.