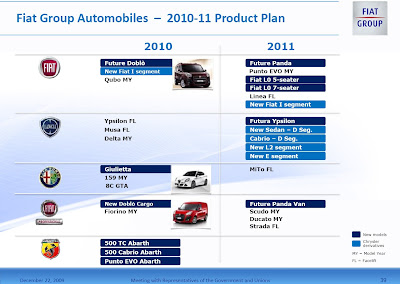 Redesigned Fiat Panda due out 2011


News on the internet is that the US version of the Fiat 500 will use the upgraded platform from the upcoming 2011 Fiat Panda and not the current European platform.

This platform upgrade will give the US 500 an advantage over its European cousin.

The chassis on the current Fiat 500 was derived from the Fiat Panda (which dates back to 2003). It was upgraded and refined in 2007 for use in the 500 and has held up very well.

The new, redesigned 2011 Panda will use a further revised version of the current platform and boasts significant improvements in torsional rigidity, strengthened crash structures and improved noise, vibration and harshness (NVH) characteristics.

This has been achieved with the use of even more high strength steel compared to the current 500 platform, reinforcing the side rocker panels, the rear cross member and frame rails.

Additionally, the roof on the US Fiat 500 will be strengthened to better withstand US spec rollover tests and the the reinforced rockers, and side members will help cope with higher speed US rear and side impact type tests. 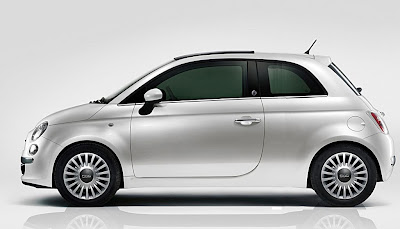 
One significant feature of the new Panda platform is the wheelbase will be stretched to 2400mm, up 100mm from the current 2300mm. That leads to speculation that the 500 could also receive the longer wheelbase. However, the reports on the internet state that the US 500 will look identical to the European version.

I would say almost identical because the front bumper and the rear tailgate of the US 500 will be different to accommodate the North American license plate. That change alone cost Fiat $10 million .
With that cost in mind, it doesn't seem likely Fiat will make any changes to the wheelbase of the US 500. 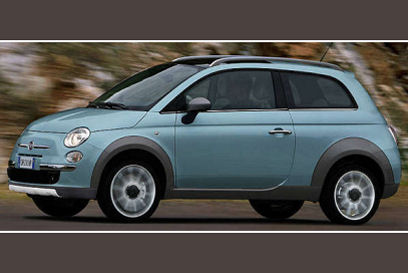 The Fiat 500 Giardiniera is a station wagon version of the normal 500 (à la Mini Clubman) and will use the extended Panda wheelbase. This model was tentatively announced last year as arriving possibly later this year and eventually coming to the US, however, lately there has been little talk from Fiat about this model. Due to the projected poor economic conditions this year, it appears the 500 Giardiniera intro will be delayed. It's better to introduce new models on an economic upswing which is expected to happen next year. We'll find out more in a few weeks when Fiat announces on April 21 its product plans for the next few years.

Summing up, if we can believe these reports (and they make sense), it sounds like great news! I'll keep an eye on this for you.
Posted by Fiat500USA.com at 9:46 PM

Great update, a slightly longer wheelbase is sure to improve the ride a bit too.

Any idea what will happen to the weight of the car? All that extra steel is of course presented as an improvement, but will no doubt come at a cost.

I sincerely hope you're right about the wheelbase. Automaker conventional wisdom is that Americans demand bloated cars. And when they don't offer us any alternatives, they don't see any sales of smaller cars to change their bias.

The only reason I care about the 500 is because it's a *small* car. The new MINI never interested me because it's twice as big as its namesake.

Daniël said...
Any idea what will happen to the weight of the car? All that extra steel is of course presented as an improvement, but will no doubt come at a cost...

Daniël, I had to stop and think for a second on the use of Ultra High Strength Steel and how it effects the weight, but now I remember;)

The concept is you are able to reduce the amount of reinforcements and the gauge of steel, this nets you a weight savings in addition to increasing the strength of the body.

Of course there is more to it than that, load paths are calculated and then steel gauge is optimized for the required solution. Here's a link to a picture that sums this up visually: (copy and paste)

Of course, we'll have to see how this works out in reality...

Hey Chris,
Have been seeing items in press stating that along with the new platform, that the first car to be introduced would be the Abarth version---This does make sense as it should get more attention for the debut than the normal cinquecento...Any info on this?---This would really be the icing on the cake!

I've scene that, but that rumor was first put out before the official November 4th announcement.

According to the latest official Chrysler time table, the Abarth intro is still fourth quarter 2011 for the 2012 model year.

However, this was the last official news as of November 4th and time frames can change. I would love to see the Abarths this year (I can't wait),but I don't know.

I would think the marketing department would want to introduce each car model, ie. 500, 500C, Abarth, Abarth 500C separately in order to get maximum exposure and press.

I think we'll have a better idea of what is going to happen sometime during the summer.

Clearly, Fiat and Chrysler are working at warp speed for the December 2010 500 intro...