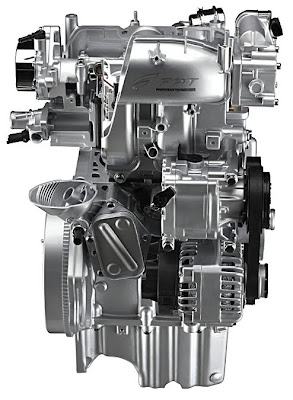 Since last April, much has been written on this blog about Fiat's Small Gas Engine (SGE) technology. During these past 10 months, I've pieced together the story on this engine (now called TWIN-AIR) but below is the official Fiat press release for this revolutionary engine.

The TWIN-AIR will forever change how the world looks at engines with less than 4 cylinders. 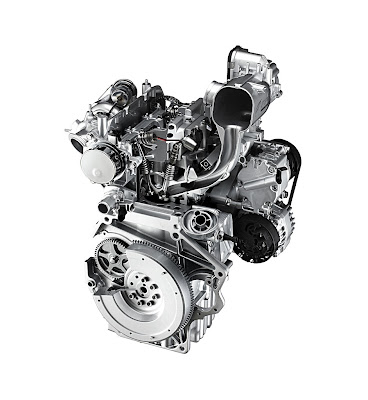 The new two-cylinder engine family made by FPT - Fiat Powertrain Technologies called TWIN-AIR will be making its debut at the Geneva Motor Show. This is a brand-new concept on the worldwide auto scene and confirms the leadership of the Fiat Group in this field. 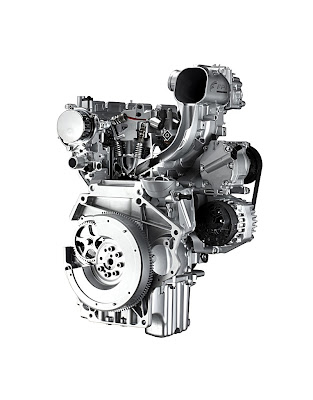 Using next-generation technology, the new engine implements the revolutionary Multiair system combined with special fluid dynamics optimized for the best fuel efficiency. Furthermore, by taking the concept of downsizing to the extreme and masterly tuning the basic mechanics, the new family - delivering from 65 to 105 HP - emits 30% less CO2 than an engine of equal performance. 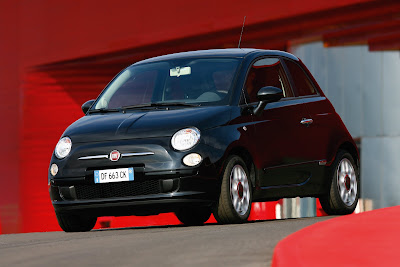 Visitors to the show will admire the first application of this new engines on a 500, the first Fiat model on which it will be introduced next September. The car is equipped with a two-cylinder turbo 85 HP engine which has the lowest CO2 emission levels for a petrol engine (up to 95 g/km) without compromising performance and driving pleasure. Compared with the two engine versions available today, it provides excellent performance with a major fuel reduction: the new turbo two-cylinder 85 HP engine consumes down to 15% less fuel and has 25% more performance than the 1.2 8v, while fuel consumption drops to a remarkable 30% with respect to the 1.4 16v with comparable performance and the same high driving pleasure.

Furthermore, with respect to a four-cylinder of equal performance and medium displacement, the new engine is significantly shorter (-23%) and lighter (-10%), opening the way to interesting further developments, such as methane fuel feed or hybrid technology combinations, again under the sign of greater eco-friendliness. In particular, a methane version of the TWIN-AIR will be available soon providing a further CO2 emission reduction: this is possible by adopting a pair of special injectors in addition to the petrol injectors on the intake manifold rails. Improving these fuel saving results using internal combustion engines will be difficult and alternative technologies will need to be developed. 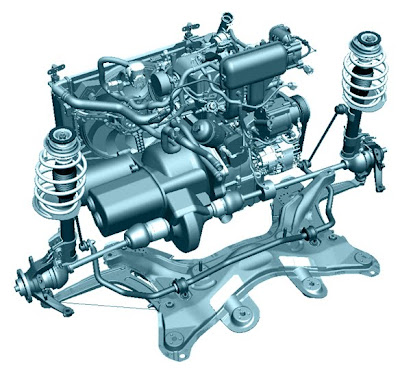 The combination of traditional engines and electric motors appears particularly promising. Precisely because of its small size, the TWIN-AIR is well suited to be coupled with an electric motor, and in general with a device arranged between engine and gearbox for recovering and storing the energy which is normally wasted during braking. 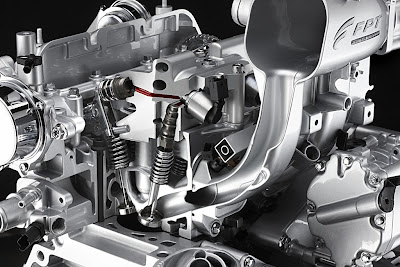 Nothing short of an engineering gem, the two-cylinder implements the revolutionary Multiair technology developed and patented by FPT – Fiat Powertrain Technologies, which was introduced on FIRE engines last year for the first time. The heart of Multiair is a new electro-hydraulic valve management system that reduces fuel consumption by controlling air directly via the inlet valves (without using the throttle). Multiair reduces polluting emissions (thanks to improved combustion control) and also considerably improves performance by boosting drivability with respect to a traditional petrol engine of equal displacement. 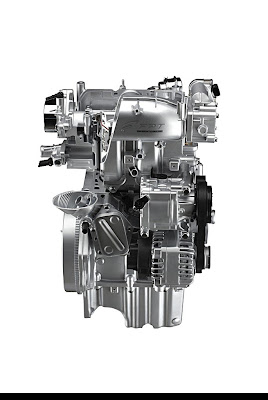 Furthermore, the new TWIN-AIR engine takes the concept of downsizing to the extreme: combining a small displacement engine with a next-generation turbocharger provides performance comparable to - or even better than - that of a larger engine but with less fuel consumption and lower emissions. And more: the turbo significantly increases the maximum torque, making it available at a very low rpm, with the result of offering greater flexibility and an unrivaled promptness of response compared to conventional aspirated engines. All this comes with a simple build that benefits strength and reliability. 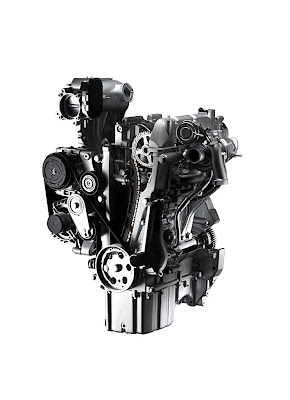 Last but not least, the new engine was painstakingly optimized and tuned. For instance, the basic two-cylinder architecture - combined with the low friction of internal parts - ranks this engine best in the "friction" class in the world. Furthermore, computer simulations have been used to identify the best possible standard displacement in terms of thermo-dynamic efficiency, and the best fluid dynamic configuration to optimize and get the best out of the MultiAir system. 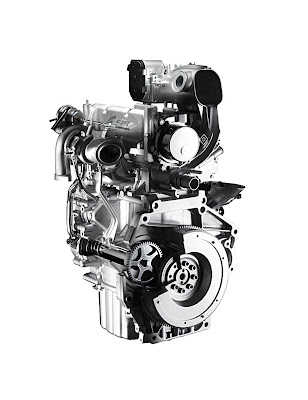 Finally, special attention has been placed on the NVH (Noise, vibration, and harshness) aspect to ensure vibration performance at least equivalent to that of a four-cylinder, with equal performance but with a characteristic sound. For this purpose, a balancing counter shaft was used to maintain optimal vibration levels in all operating conditions of the engine, from the idling speed to top power.
Posted by Fiat500USA.com at 9:47 AM

I would love to know the engine weight. The post above says it weighs 10% less than a 4 cylinder of the same performance, but that does not tell me much. Does it have an aluminum block?

No, I would guess it has a cast iron block due to high BMEP. In some other site I've seen that it weighs about 115 kg which is obviously not a world record. This figure well matches with cast iron structure guess of mine.
Definitely good engineering though. Excited to see such downsized and optimised car engines on the market.

Speaking about the Fiat hybrids, the technology double clutch with electric motor between has been stolen by a patent that Fiat Company has never wanted to purchase, but only shamelessly to copy. I invite to visit my blog where her "vitality" of the Fiat planners it appears in all of evidence:
http://dualsymbioticelectromechanicalengine.blogspot.com/

Whoever appreciates an honest industrial ethics in defence of intellectual ownership should spread out the history reported in my blog. If the industries can afford unpunished to copy the ideas and defending it need very expensive legal action, to which target need the patents? How our young people can find intellectual courage if the economic potentates crush the rights of the single ones?

When will this great engine be coming out in the states though???

I hear they also have it hooked up in a hybrid configuration with an 8 HP electric motor -- should be a lethal combo. I read on one blog it was headed to the US, but I wouldn't hold my breath...
kennyrayandersen

I was going to buy a 500 until I saw the fuel economy with the 1.4L engine. I just can't justify the car that can't get 40mpg or better on the highway and is that small.

If they put that small engine in and it gets better than 45 mpg I will buy the car, I don't care if it's slow. After all, you can only go as fast as the guy in front of you.

It's pretty easy to get over 40mpg, especially on the highway. I average 38-40mpg on my 15 mile hilly, rural commute. Check out the Fiat USA Facebook page and there are folks who post the actual mpg and not the EPA. I haven't done any real highway driving but based on my stop and go commute, I'm expecting over 40mpg.

I agree with Chris. I am currently averaging between 50 and 55 mpg in my Honda Insight, which, believe it or not, beat out my previous Prius 1.5. I would really like my next car to be like the twin air, or equally exciting the new Ford Fiesta 1.0 turbo eco-boost three cylinder engine. If either of those get more than 40 mpg in the city cycle (the more important number), then I'll be buying one of those as opposed to another hybrid. A hybrid twin air would be incredible.

I have questioned the Twin Air coming to the US while in Europe for a visit. They said it will never come to the US shores only for Europe.....that sucks.
I test drove one and it was amazing I wanted one bad.