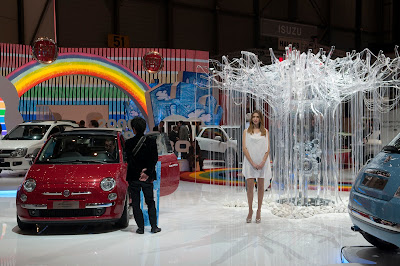 It's been an exciting week for Fiat fans at the 2010 Geneva International Motor Show. Below are a couple of videos highlighting the new TWINAIR engine and the rationalizing of car size.


Paolo Martinelli, Fiat Powertrain Vice President, talks about TWIN-AIR engine concept at the 2010 Geneva Motor show. This downsizing concept will feature prominently in Chrysler's rebirth in the next few years. For all the MOPAR fans out there, don't worry, Martinelli knows engines and how to produce horsepower, he previously was head of Scuderia Ferrari's Engine Department from 1994 to 2006 and was responsible for developing the Ferrari V10 Formula One engines that won 6 constructor championships.

To illustrate this downsizing concept, let's take a look at Chrysler's V8 Hemi engine fitted to the Dodge Challenger R/T. This engine is a 5.7L V8 with 376hp, but if you applied the downsizing concept, and using the same specific output of the TWINAIR engine, you can have the same 376hp output in an engine of 3.2L. Now this example is simplified, but it gives you the idea. 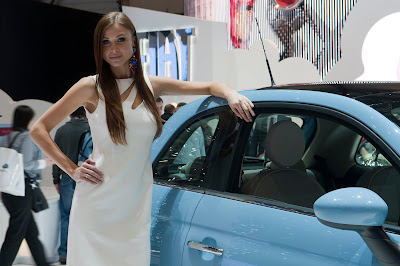 Roberto Giolito, Fiat Style Director, discuses the concept of "downshifting" - the values of a large sedan within a small car - and of TWIN-AIR. Looking back, you can trace this "downshifting" concept to 1936 (when Fiat is acknowledged as inventing the modern small car, the Topolino) and throughout the years culminating with the ultimate interpretation, the current 500. This concept of having all the advantages of a bigger car, with none of the disadvantages, will be applied to Chrysler products coming in the near future.
Posted by Fiat500USA.com at 8:44 PM

Anyone interested on more information on the TwinAir might look up the magazine "Car" from England. In the September edition (which is on news stands in North America from about Sept 22 to Oct 22) there is a positive and comprehensive article. In the same issue is an interesting bit on Gordon Murray's city car (T25). As Mr Murray is such a fan of the rear engine 500 (at one point owning five), I am surprised he did not use the TwinAir in his latest endeavour.
Peter Vancouver