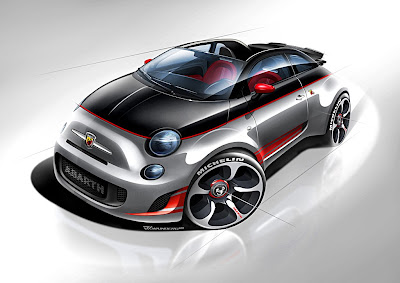 Fiat is introducing the long awaited convertible version of the 500 Abarth called the Abarth 500C. This version will no doubt find its way to the US sometime after the regular 500 Abarth shows up on our shore (currently estimated the fourth quarter 2011).

Until then we'll have to settle for pictures, so enjoy the official press release below: 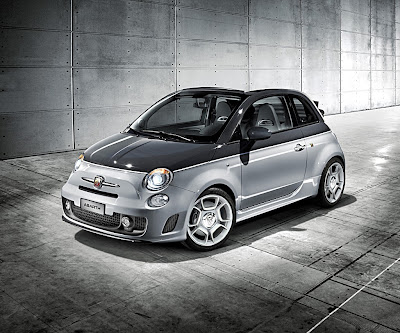 The brand new Abarth 500C is the result of developments in both style and performance. This is not the first time that Abarth has undertaken the performance tuning of a convertible and the company has used all its past experience to improve both stylistic and technical factors. 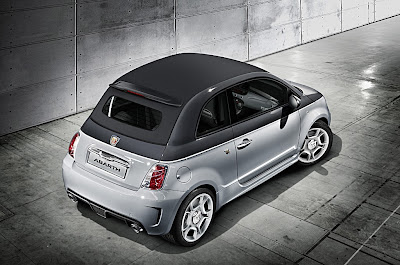 While the eye is inevitably drawn to the new body finish, based on elegant two-tone color schemes, the extended, dynamic-looking spoiler instantly reminds you that the Abarth 500C is first and foremost a high class sportswear. In addition to enhancing the aggressive appearance of the 500C, the spoiler effectively boosts CZ loading and creates a smoother air flow. 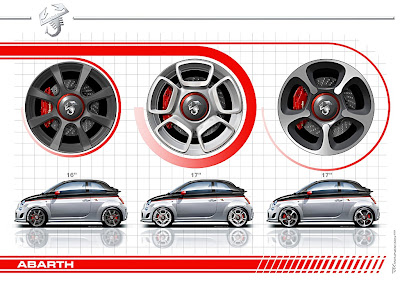 The looks of the Abarth 500C have also benefited from the new design 17” diamond finished alloy wheels... 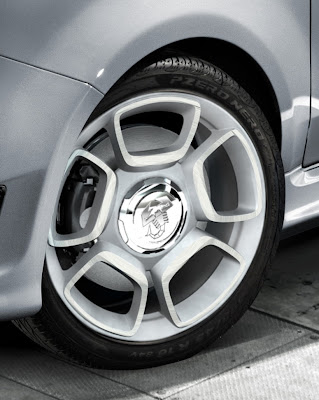 ...including the sought-after diamond finished 5 petal white wheels.
Another strong point of the Abarth 500C is its exceptional interior climate and acoustic comfort. 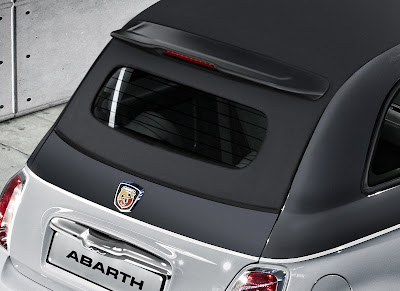 Thorough aerodynamic research has minimized turbulence with the roof open, allowing the sound of the road and engine to be enjoyed to the full. The new car therefore delivers a more complete sport driving experience and enhanced enjoyment. In an Abarth 500C, you can experience all the thrills of a real sports car. With the roof up, performance is on a par with a hard top. 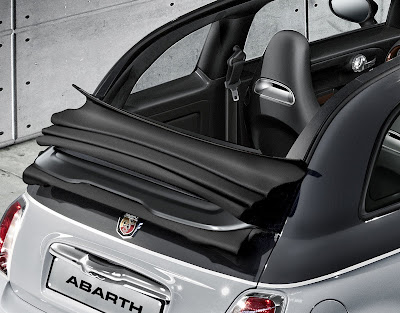 When the roof down, the range of sensations and emotions is dramatically extended, and includes all the pleasures of feeling the wind in your hair and the sound of the twin tail pipes.

This video shows how the top works on the 500C

The roof is electrically operated and slides along guides in the car’s sides to let you enjoy your Abarth 500C all year round. A true object of design, the Abarth 500C’s roof stands out for its elegant, electrically controlled movement and its impressively finished and carefully administered technical features, including a glass rear window and third brake light built into the spoiler. 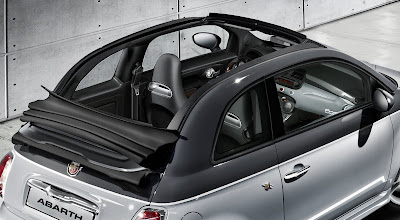 The soft top comes in a choice of two colors (black or titanium grey), to suit the classic Abarth colors as well as the 2 two-tone color schemes created specially for the car: one overtly sporting (black and race white) and the other in two elegant shades of grey. 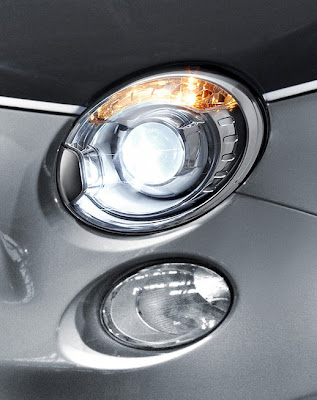 Finally, a colored graphic runs around the two-tone body, simultaneously dividing and uniting the two souls of the car: below, all the performance of a true sportster, above, all the elegance of a convertible. 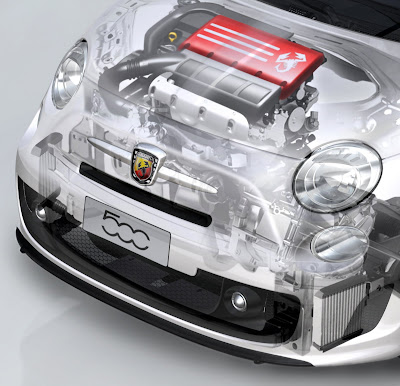 The 500C is a true Abarth, as its 140 HP 1.4 Turbo T-Jet engine clearly shows. Performance is impressive: 0-100 km/h in only 8.1 seconds and a peak torque of 206 at 2000 rpm. An engine that not only delivers thrilling performance but also makes the Abarth 500C extremely pleasant to drive day in, day out. 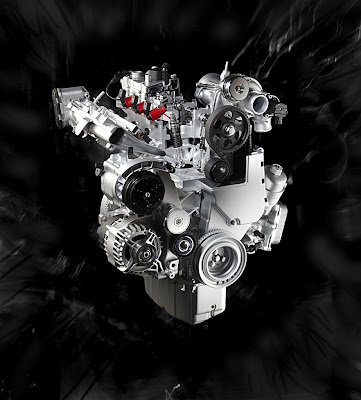 The engine is a 4 cylinder, 16 valve, unit of 1,368 cc, fitted with an IHI RHF3-P fixed geometry turbocharger. The unit delivers exciting performance, pushing the car to a top speed of 205 km/h and accelerating it from 0 to 100 km/h in just 8.1 seconds. These exceptional figures are also the result of an over boost function engaged by pressing the “Sport” button, which modifies engine control unit mapping, turbo pressure, and steering wheel loading. Yet despite its true Abarth spirit, the 500C still only consumes 6.5 l/100 km in the combined cycle. 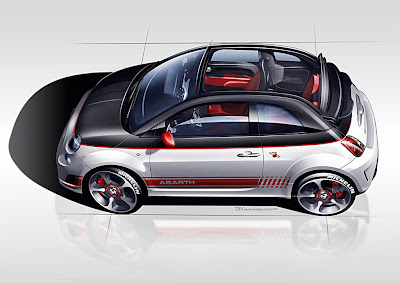 The car’s sporting yet flexible engine is also environmentally friendly and already conforms to the strict Euro 5 standards soon to be introduced.

On top of its superb engine, the Abarth 500C boasts all the technical content of the model from which it is derived, including TTC (Torque Transfer Control) The most obvious innovation, of course, is the race-derived “ABARTH Competizione” gearbox, fitted as standard.
It was 1949 and Karl Abarth officially began marketing the first product, a race-derived gearbox with steering wheel control for the Fiat Topolino, capable of delivering quick gear changes in sporty driving conditions.


With the same philosophy, more than 60 years later, the “ABARTH Competizione” is offered as standard on the Abarth 500C. This electro-hydraulically actuated, 6-speed gearbox is operated by steering wheel paddles and controlled by a system that maximizes economy and performance when driven hard. 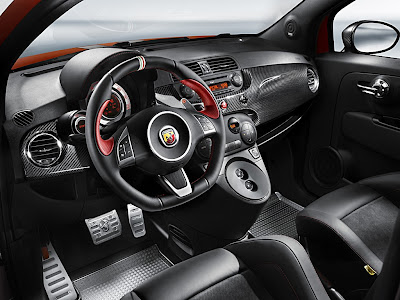 This is the interior of the Abarth 695 "Tributo Ferrari", it shows the transmission controls that should be the same as the Abarth 500C

The innovative MTA-derived (Manual Transmission Automated) system is based on a conventional mechanical gearbox on which the traditional gear lever has been replaced with an actuator electronically controlled by the TCU (Transmission Control Unit) to optimize gear changes and mechanical efficiency. The gearbox can be used in two modes: auto for maximum comfort, and manual for maximum performance. “Sport” mode can be engaged in both gearbox modes and reduces gear shift times. Learn more about the MTA here. 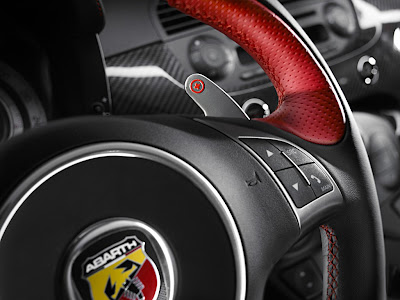 The new “ABARTH Competizione” gearbox makes driving even more fun thanks to race-derived functions like steering wheel paddle-shifting, just like on a real super-car.
Further confirmation that the 500C is a genuine Abarth comes from the fact that a specific “SS” tuning kit is currently being developed specially for it, offering an even higher level of performance. 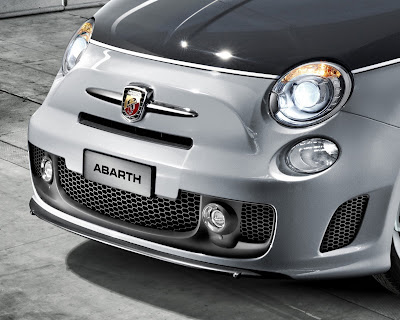 The Abarth 500C is aimed at customers seeking everything the scorpion brand represents in terms of performance and innovation, plus the ultimate in style and versatility. 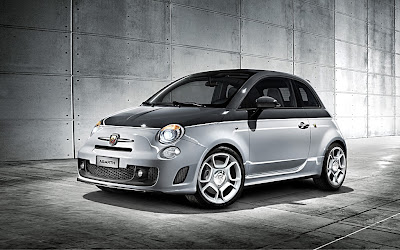 The Abarth 500C incorporates all the safety systems already installed on the Abarth 500.
Designed to conform to the strictest standards, the Abarth 500C is one of the safest vehicles in its class. Stable and effective braking, exhilarating acceleration from a 140 HP engine, and ultra-reliable handling mean that the Abarth 500C will get you through even the tightest scrapes without you batting an eyelid.


The 500C is equipped as standard with 7 airbags (two front, two window and two side airbags plus one driver knee airbag): a record for this class of vehicle. The new version is also equipped with sophisticated technical solutions to maximize active safety and control: these include ABS with EBD (Electronic Braking Distribution), a sophisticated ESP system (Electronic Stability Program), ASR (Anti Slip Regulation) traction control, Hill Holder to facilitate starting off on slopes, and HBA (Hydraulic Brake Assistance) to help with emergency braking.

The Abarth 500C also features two advanced control systems: “TTC” (Torque Transfer Control) and “GSI” (Gear Shift Indicator). TTC improves the transfer of torque from the engine to the wheels and in particular gives excellent handling on bends, making sports driving safer and more fun than ever. GSI (Gear Shift Indicator) provides a signal on the instrument panel (a LED that flashes five times) to tell you when to change gear. In Normal mode, GSI tells you that changing up will help reduce fuel consumption. In Sport mode, the signal means that changing gear will give you better performance. 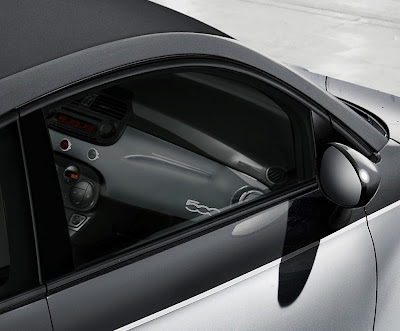 Finally, the Abarth 500C is fitted with dynamic systems and comfort-enhancing equipment to ensure that occupants enjoy luxury as well as safety on all types of journey. Take the suspension system for example. 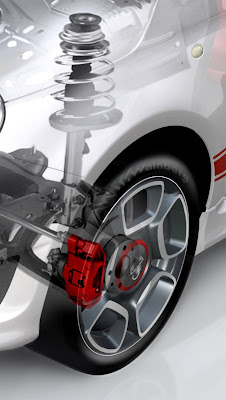 The front suspension is based on independent McPherson struts... 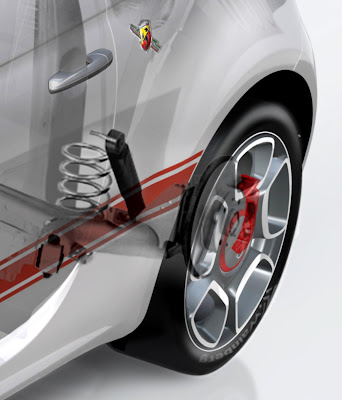 ...while the rear suspension is semi-independent, with an inter-connecting torsion bar. Specially developed by Magneti Marelli, both suspension schemes have been optimized specifically for the Abarth 500C to ensure superb handling and the highest possible level of comfort. 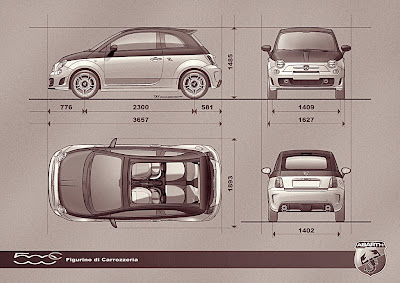 Sold, sold and sold!!! Forget about going to book a test drive, I'm already there!

I have it in the UK where I live and want to buy it for my house in the USA. I hope it will be here soon. Guys if you can get the SS version as the difference is great.