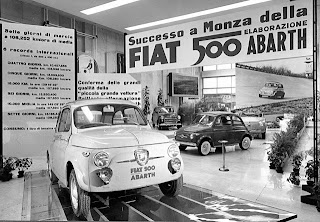 Abarth is an Italian manufacturer famous for creating record breaking racing cars and performance tuning car engines for regular road use and racing. It was founded by Karl (Carlo) Abarth who was an Austrian that lived in Turin, Italy.
At the 1957 Turin Motor Show, Carlo Abarth exhibited an Abarth version of the Fiat Nuova 500, just launched by Fiat, which boosted the standard horsepower of 13 bhp to 20 bhp, and the top speed from 85 km/h (53 mph) to 100 km/h (62 mph). He did this without altering the engine capacity but by increasing the compression ratio (from 6.55:1 to 8.7:1), and fitting a Weber 26 IMB carburettor and a special Abarth exhaust. 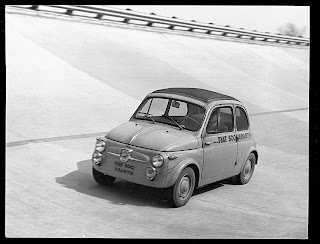 Fiat 500 Abarth at Monza Racetrack
On October 15, 1957, Abarth sent a number of Fiat 500 Abarth tuned cars to the Monza racing circuit for a demonstration of the performance potential of the Fiat 500 with the ‘Abarth treatment’. It was a spectacular demonstration but that was just the beginning.
In 1958, Abarth came out with an even hotter version of the Fiat Nuova 500. Abarth increased the compression ratio to 10.5:1, revised the intake and exhaust system and increased the power output to 26 bhp and top speed of 118 km/h (73 mph). That year a Fiat 500 Abarth performed a ‘marathon’ test that broke 6 international world records. In seven days and seven nights it covered a distance of 18,186 kilometers (11,300 miles) at an average speed of 108 km/h (67 mph). The records shattered were:

In 1963 Abarth came out with an upgraded version of the Fiat 500. Abarth called it the 595, and had a corresponding engine size increase from 499.5 cc to 595 cc with power going up to 27 bhp. The engine size increase, along with the adoption of a Solex C28 PBJ carburettor, enabled this Fiat 500 Abarth to pass the 120 km/h (75 mph) mark. It was an impressive performer and could be ordered as a ready assembled car or as a kit for an extra 145,000 lire.
But there was still more, with the seemingly unlimited potential of the Fiat 500, Abarth went on to develop the more powerful 595 ss with power eventually reaching 34 bhp and a top speed of over 130 km/h (81 mph). 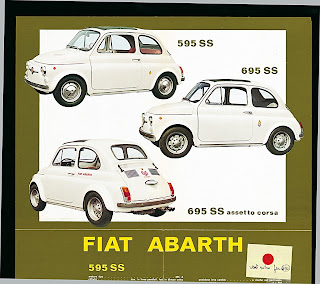 
Several evolutions of the 595 appeared in 1964, the 595 SS convertible saloon, the 695, and the 695 SS in 1965 and 1966. Over the years, 500 Abarths became legendary and introduced the fashion of turning ones own car into a 500 Abarth. It became popular for people, unable to purchase an Abarth, to try to get hold of the styling accessories. As a result, there were a number of very normal 500 D on the road that resembled the 595, stylistically at least. This was popular in the 1960's and still continues today.
The many accomplishments of the legendary Fiat 500 Abarth, from world records, to numerous racing wins are an important part of the DNA that makes up the Fiat Nuova 500. This DNA is being called upon by Fiat for the New 500 that started being designed in 2004 for the launch on the 50th anniversary of the 500 in 2007.
References: Fiat Group Auto and Fiat.com