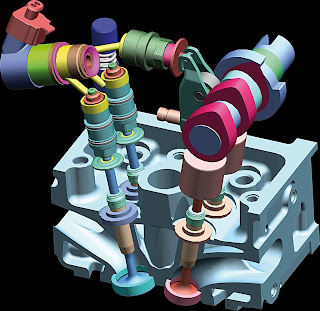 Fiat has introduced their Multiair engine technology. This breakthrough greatly increases fuel economy and engine performance while reducing emissions. Fiat has been working on this since the 1980's and shows it's forward thinking. It's an exciting 21'st century update to the internal combustion engine and is another example of Fiat innovation.

Below I've put together, with the help of videos and press releases, how the system works so you can impress your friends with your knowledge. Rest assured other manufacturers will copy this technology so you'll be the first in knowing how it works and it's origin.

This first video simply explains this technology so it's easy to grasp. The second video is the official announcement at the 79th Geneva International Motorshow .

Multiair is the new electro-hydraulic system of engine valves for dynamic and direct control of air and combustion, cylinder by cylinder and stroke by stroke .Thanks to a direct control of the air through the intake engine valves without using the throttle, Multiair helps reducing fuel consumption; pollutant emissions are likewise reduced through combustion control.
Multiair is a versatile technology, easily applicable to all gasoline engines and with future potential developments also for Diesel engines

BENEFITS:
FUEL CONSUMPTION AND EMISSIONS REDUCTION
INCREASE OF BOTH MAX POWER AND TORQUE
ENHANCED PERFORMANCE AND FUN TO DRIVE


The Fiat Multiair Technology: some history

In the last decade, the development of the Common Rail technology for Diesel engines marked a breakthrough in the passenger car market. To be competitive also in the field of gasoline engines, Fiat Group decided to follow the same approach and focus on breakthrough technologies. The aim was to provide customers with substantial benefits in terms of fuel economy and fun-to-drive while maintaining the engine intrinsic comfort characteristics, based on a smooth combustion process and on light structures and components.


The key parameter to control Diesel engine combustion and therefore performance, emissions and fuel consumption is the quantity and characteristics of the fuel injected into cylinders. That is the reason why the Common Rail electronic Diesel fuel injection system was such a fundamental breakthrough in Direct Injection Diesel engine technology.

The key parameter to control gasoline engine combustion, and therefore performance, emissions and fuel consumption, is the quantity and characteristics of the fresh air charge in the cylinders. In conventional gasoline engines the air mass trapped in the cylinders is controlled by keeping the intake valves opening constant and adjusting upstream pressure through a throttle valve. One of the drawbacks of this simple conventional mechanical control is that the engine wastes about 10% of the input energy in pumping the air charge from a lower intake pressure to the atmospheric exhaust pressure.

A fundamental breakthrough in air mass control, and therefore in gasoline engine technology, is based on direct air charge metering at the cylinder inlet ports by means of an advanced electronic actuation and control of the intake valves, while maintaining a constant natural upstream pressure.

Research on this key technology started in the 80’s, when engine electronic control technologies reached the stage of mature technologies.

At the beginning world-wide research efforts were focused on the electromagnetic actuation concept, following which valve opening and closing is obtained by alternatively energizing upper and lower magnets with an armature connected to the valve. This actuating principle had the intrinsic appeal of maximum flexibility and dynamic response in valve control, but despite a decade of significant development efforts the main drawbacks of the concept - its being intrinsically not fail-safe and its high energy absorption - could not be fully overcome.


At this point most automotive companies fell back on the development of the simpler, robust and well-known electromechanical concepts, based on the valve lift variation through dedicated mechanisms, usually combined with cam phasers to allow control of both valve lift and phase.

The main limitation of these systems is low flexibility in valve opening schedules and a much lower dynamic response; for example all the cylinders of an engine bank are actuated simultaneously thereby excluding any cylinder selective actions. Many similar electromechanical valve control systems were then introduced over the past decade.

In the mid 90’s Fiat Group research efforts switched to electro-hydraulic actuation, leveraging on the know-how gained during the Common Rail development. The goal was to reach the desired flexibility of valve opening schedule air mass control on a cylinder-by-cylinder and stroke-by-stroke basis.


The Fiat Multiair Technology: how it works


The operating principle of the system, applied to intake valves, is the following: a piston, moved by a mechanical intake cam, is connected to the intake valve through a hydraulic chamber, which is controlled by a normally open on/off Solenoid Valve.

For low-rpm Torque, the Solenoid Valve is opened near the end of the cam profile, leading to early intake valve closing. This eliminates unwanted backflow into the manifold and maximizes the air mass trapped in the cylinders.

In engine part load, the Solenoid Valve is opened earlier causing partial valve openings to control the trapped air mass as a function of the required torque. Alternatively the intake valves can be partially opened by closing the Solenoid Valve once the mechanical cam action has already started. In this case the air stream into the cylinder is faster and results in higher in-cylinder turbulence.

The last two actuation modes can be combined in the same intake stroke, generating a so-called "Multilift" mode, that enhances turbulence and combustion rate at very low loads. 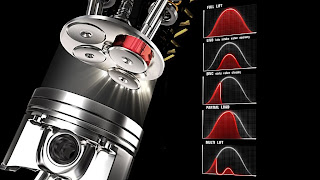 
The Multiair Technology potential benefits for gasoline engines exploited so far can be summarized as follows:

Maximum Power is increased by up to 10% thanks to the adoption of a power-oriented mechanical cam profile.

Low-rpm Torque is improved by up to 15% through early intake valve closing strategies that maximize the air mass trapped in the cylinders.

Elimination of pumping losses brings a 10% reduction of Fuel Consumption and CO2 emissions, both in Naturally Aspirated and Turbocharged engines with the same displacement.

Recirculation, realized by reopening the intake valves during the exhaust stroke, result in emissions reduction ranging from 40% for HC / CO to 60% for NOx.

Application of the Multiair Technology to FPT Engines

The first world-wide application of the Multiair technology will be the Fire 1400cc 16V Naturally Aspirated and Turbocharged engines.

The second application is a new Small Gasoline Engine (SGE - 900cc Twin-cylinder) where cylinder head design has been specifically optimized for the Multiair actuator integration. Here again, there will be both a Naturally Aspirated and a Turbocharged version. A specific Turbocharged engine version will be bi-fuel (gasoline- CNG).

Thanks to radical downsizing, the Turbocharged Small Gasoline Engine achieves Diesel-like CO2 emission levels, which are further reduced in its Natural Gas version with CO2 emissions lower than 80 g/km in many vehicle applications.

Further Potential of the Multiair Technology


All breakthrough technologies open a new world of further potential benefits, which are usually not fully exploited in the first generation, in order to minimize industrial risk.

The Common Rail technology, a Fiat worldwide premiere in 1997, paved the way to more than a decade of further technological evolutions such as "Multijet" for multiple injections, Small Diesel Engines and the very recent Modular Injection technology, soon to be launched on the market.

Similarly, the Multiair technology, a Fiat worldwide premiere in 2009, will pave the way to a wave of further technological evolutions for gasoline engines:

While electronic gasoline fuel injection developed in the 70’s and Common Rail developed in the 90’s were fuel specific breakthrough technologies, the Multiair Electronic Valve Control technology can be applied to all internal combustion engines whatever fuel they burn.

Multiair, initially developed for Spark Ignition engines burning light fuel ranging from gasoline to Natural Gas and hydrogen, has wide potential also for Diesel engine emissions reduction.
Intrinsic NOx reduction of up to 60% can be obtained by internal Exhaust Gas Recirculation (iEGR) realized with intake valves reopening during the exhaust stroke, while optimal valve control strategies during cold start and warm-up bring up to 40% HC and CO reduction of emissions. Further substantial reduction comes from the more efficient management and regeneration of the Diesel Particulate Filter and NOx Storage Catalyst, thanks to the highly dynamic air mass flow control during transient engine operation.

Diesel engine performance improvement is similar to that of the gasoline engine and is based on the same physical principles. Instead, fuel consumption benefits are limited to few percentage points because of the low pumping losses of Diesel engines, one of the reasons of their superior fuel economy.

In the future, powertrain technical evolution might benefit from a progressive unification of gasoline and Diesel engines architectures.
A Multiair engine cylinder head can be therefore conceived and developed, where both combustion systems can be fully optimized without compromises. Moreover the Multiair electro-hydraulic actuator is physically the same, with minor machining differences, while internal subcomponents are all carry over from the Fire and SGE applications.

Valve actuators are really needed for complex tasks in the high power market.If the load requires accurate positioning, the electric actuators as well as the valve actuators has the advantage among others.That is why,to familiarize yourself in this kind of industrial application , knowing how an automation works is a wisely action and will positively keep us in track.

More complex control systems using valves requiring automatic control based on an external input require an actuator. An actuator will stroke the valve depending on its input and set-up, allowing the valve to be positioned accurately, and allowing control over a variety of requirements.