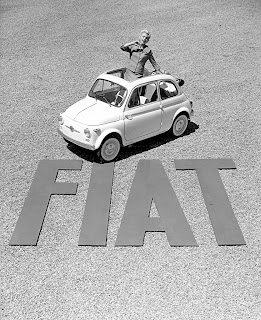 It offered the population of Europe a way to drive a throughly modern automobile at an affordable price. It was more than basic transportation, though. It's design was clever and ingenious and held the promise of an exciting new life to those who never had transportation before .

It is a mechanical device but took on a personality to become "bigger" than it was physically. It provided transportation to millions, enabling people to drive to places to get better jobs, offered new recreational possibilities and truly changed the lives of millions who previously didn't have access to these new life possibilities.


In the next few posts, with the courtesy of Fiat Auto Group Press, we'll trace the origin of the Fiat 500. A car Europe knows very well and is about to be introduced to the United States.

Some cars go down in history for their technological or stylistic innovations. Others deserve to be remembered for the role they have played in the daily life of an entire generation or an entire country. Few succeed in combining the two: technology and sentiment. They leave an indelible mark, becoming a sort of icon of their age. The Nuova 500 is one of these. In a career lasting 18 years, from 1957 to 1975, exactly 3,893,294 were built, and it helped Italians and numerous other Europeans to satisfy the need for individual mobility that began to gain momentum from the early 1950s. The Nuova 500, even more than the 600 (1955), also brought the end of the post-war emergency period for motorization and the automotive industry in Italy, and the start of the striving for comfort, albeit minimal and economical. With the Nuova 500, and its four popular wheels, the country of the ‘Poor but beautiful’ became, or tried to be, not quite as poor (and to a certain extent it succeeded), but above all, able to move around more freely.

The Nuova 500 also concluded the rebirth of Fiat and of its product range, after the devastation of the Second World War. Dante Giacosa, the ‘father’ of the Nuova 500, but also of the previous 500 Topolino and of numerous other models, said in his book ‘Progetti alla Fiat prima del computer’ (Design at Fiat before the computer), that when the 500 was launched on July 4, 1957, Fiat ‘realized its program of renewing its models, to replace those born before the Second World War’. At two-year intervals, the 1400, 1900, 1100 – 103, 600, Nuova 500 and their derivatives were launched on the international market. In just 10 years, Fiat had conceived and begun manufacture of four completely new basic models that had their roots in the technological culture that had grown up in its own offices and laboratories. No Italian or foreign model influenced the development of these projects. It may seem overly emphatic to underline this fact today, but it was utterly comprehensible at the time, in the late 1940s and 1950s, when Lancia and Alfa Romeo both operated autonomously in Italy and were therefore Fiat’s competitors, whereas abroad, in Germany, and above all in the United States, the domestic industry still seemed to be one step ahead in many ways.


Dante Giacosa also wrote about the launch of the Nuova 500 and said that the ‘Press Office, run by Gino Pestelli assisted by the hyperactive Mariuccia Rubiolo, wanted me to collaborate on the advertising launch’. Once the name ‘Nuova 500 had been chosen to recall the famous Topolino’, the message soon followed, with a slogan that claimed: ‘twenty years after the original 500 (the Topolino was launched in 1936), on a similar wave of success, here comes the Nuova 500, completely new, modern, less expensive, more economical, a worthy successor to the world’s first runabout, built by Fiat’. Giacosa also revealed that the term ‘Big little car’ was also coined at Mirafiori, but the pragmatic engineer commented that ‘people just called it the 500’. Fifty years after that Summer of 1957, in an age when television is even available on mobile phones, with shots and reports from all over the universe, it is entertaining to read that ‘the launch was held in great style. National television installed itself in the Mirafiori workshop on a boiling hot evening in July, and even I was invited for a live interview on the assembly line.’

18 years after that ‘boiling hot evening in July’, during which time almost 3.9 million cars were built, another very hot day dawned, August 4, 1975, the day on which the ‘last’ car, at least of the 1957-75 Nuova Fiat 500 series, was built, not at Mirafiori but at the SicilFiat plant in Termini Imerese (Palermo). 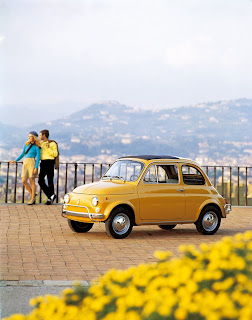 The reconstruction and conquest of the market

The Nuova 500 was not just a brilliant idea by Dante Giacosa, like the 600 and the many other cars he designed. Nor was it just a model of which millions were made, which got the mission and contents just right to fall in with the company’s programmes at the time. More than anything else, the 500 was the fruit of a strategy to develop and revamp its range that Fiat had already embarked on during the Second World War. Vittorio Valletta, Managing Director first and then company Chairman from 1946 (after the death of Senator Agnelli), asked Giacosa to start thinking of new cars that could go into production after the war while Turin was still being targeted by Allied air raids, and the Mirafiori offices were occupied by the German ‘allies-occupiers’.

But it was only in the early 1950s, and therefore when the reconstruction of the plants was well underway, that work began in earnest at Mirafiori on the new models. In 1949 the Topolino C, the last of the series, went into production, but other ‘real’ new models arrived: the 1400, a cabrio version of the 1400, the 1900 diesel, the Nuova 1100 of 1953 and its derived versions. And in 1952, in a blaze of technology, the sporty 8 V appeared, followed the next year by a futuristic turbine-powered prototype.

The reconstruction years at Fiat and the consequent development of new cars, including the Nuova 500, reflect the situation in the country in the early 1950s, when there were growing signs that the market was becoming increasingly receptive to mass motorisation. The ‘need’ for individual mobility which was answered, in Italy, from 1946 until the mid 1950s, not by cars but by two-wheeled vehicles, and particularly the scooters built by Piaggio and Innocenti, the Vespa and the Lambretta. The former, for example, from an output of 2500 units in 1946, reached its one millionth unit just 10 years later, in 1956.

In 1955, registration of two-wheeled vehicles in Italy totalled 400,000 units, an amazing record, if we think that in 1951 there were just under 40,000 licensed motor vehicles registered. The boom of the two-wheeler was an important indication of the prospects for the four-wheeled vehicle market and prompted Fiat to speed up the development of its new model. The great commitment by Fiat design engineers culminated in 1955 with the 600, Italy’s first real popular family car (between 1955 and 1970, 2,777,313 were built in Mirafiori alone) and in 1957 with the Nuova 500.

The boom of ‘accessible’ four-wheeled vehicles heralded the start of the crisis for two-wheelers. From 1955 (the year that the 600 was launched) registrations of motorcycles and scooters began to fall off, and by 1957, when the 500 arrived, they were just above 330,000 units/year; in 1965, the year that Fiat output first exceeded one million cars in a year, registrations of motorcycles were just above 200,000 units. In other words, if Fiat had set out to win over a potential bracket of the domestic market with its 500 and 600 to the detriment of other forms of vehicles, it had been successful. ‘Pioneering’ travel on two wheels, albeit motorised, was no longer enough in the new, more affluent Italy. The number of wheels doubled, and people wanted a roof over their heads to protect them from the weather, in other words, they wanted a car.