Before we continue with the history of the Fiat 500, let's talk about the man responsible for its design. 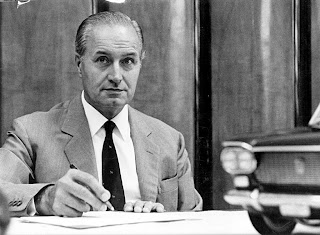 Dante Giacosa became one of the most influential car engineer/designers in Automotive history. Born on January 3, 1905. He worked at Fiat from 1930 to 1970. He rose from a design engineer to Car Engineering Manager to head of the Vehicle Engineering department in 1955, and in 1966, Division Manager and Member of the Executive Committee. When he left Fiat in 1970 he remained a consultant ‘for life’.

In 1927, at 22 years of age, he graduated from Turin Polytechnic with a degree in Mechanical Engineering. He joined Fiat shortly after graduating and, after a period designing diesel and aircraft engines, became Car Engineering Manager in 1933.

In that year, Fiat completed research on small car design arriving at the conclusion that in order for a small car design to be successful it couldn't be a large car scaled down to smaller dimensions (think Pinto, early rwd Toyota Corrolas and Datsun 1200's etc.). It had to be a more advanced design, designed from the start, from the inside out to accommodate passengers and luggage.

Previously, the small car prototypes Fiat had made up to then were modern, conventional designs equal to other competitors, but Fiat management wanted something better. Their design specifications called for a car that would stay ahead of the competition for many years to come, it also had to have lower manufacturing costs. This would require advanced design and engineering. 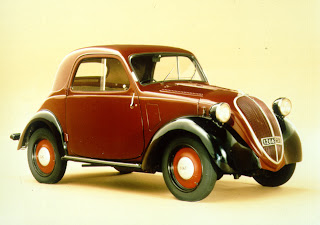 
Dante Giacosa was the man in charge of this project, the car we know as the original Fiat 500 or Topolino (the Italian name for Mickey Mouse, meaning "little mouse"). What he came up with revolutionized small car design. It had advanced packaging with major mechanical components being placed in ingenious positions to offer the most room and give the car excellent road holding, braking , directional stability and accommodations. The suspension and braking systems were modern and worthy of a car costing much more. It had outstanding fuel economy and excellent reliability. It was also economical to manufacture with around 520,000 cars being produced between 1936 and ending with the 500C of 1955. 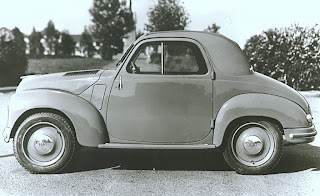 This design was rejected at the moment (1947 post war Europe) because of the high costs involved in manufacturing. However, what became clear were the days of conventional front engine/rear wheel drive platforms for the smallest cars were drawing to an end. The space used for the propeller shaft and large rear axle took up too much space in a small car. The engine had to go at either end of the car and had to encompass the transmission.

Rear mounting of the power train was not automatically adopted, though. Rear engine cars of the period where known for treacherous handling in certain conditions. This was totally unacceptable to Fiat and Giacosa.

There were two major factors that played a part in the unacceptable handling. First, the suspension design favored at the time (swing axles) played a critical role in the unacceptable handling. Swing axles undergo severe camber changes near the limit of their suspension travel. This contributes to the loss of adhesion and subsequent loss of control. Giacosa's solution was to adopt a semi trailing arm suspension design. This type of suspension doesn't undergo the severe camber changes and offers more benign handling characteristics. It was more expensive to design but shows where Giacosa and Fiat placed their priorities. It is notable that it took VW and Chevrolet's Corvair many years (and deaths) to adopt a similar semi trailing arm suspension for their cars.

The other factor was the weight and size of the engine. Once the power train went over a certain weight it was difficult to tame the inherent over steering characteristics. This might be entertaining in a sports car but not acceptable in a car made for normal folks with normal driving skill. Through careful engineering, careful placement of components and using light weight castings, Giacosa kept the weight down and minimized the impact the power train had when the car was loaded with passengers.

It should be noted that Fiat used rear engine placement on only their smallest of cars which naturally had the smallest (and lightest) engines. This concept looks like it will make its reappearance on the New 2010 Topolino, a car smaller than the New 500. 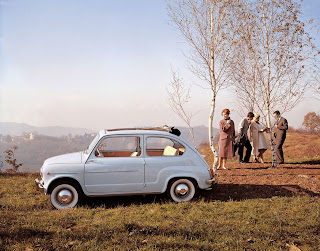 
All this led to the birth of the 1955 Fiat 600 which replaced the Fiat 500C. Compared to the 500C it replaced it, the 600 had a four inch reduction in wheelbase but sat four adults as opposed to the two in the previous model. It was also lower by an inch and a half but five inches longer. An example of its design excellence is despite the bigger overall dimensions and being a four seater, the car weighed within eleven pounds of the two seater 500C. 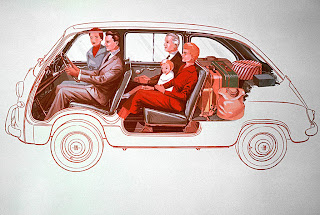 The 1955-1960 Fiat 600 Multipla
This brings us to the next car Giacosa's brilliance was demonstrated, the 1957 Nouva 500. We'll go into the design specifics on another post. But briefly, mid Fifties Italy was still devastated from WWII and poor. Two seater micro cars/bubble cars were becoming popular. These typically sat 1-3 people and were arguably closer to a motorcycle than car. Giaoccosa came up with the Nouva 500. A real car people could afford and offered a real automotive experience and then some. Nearly 3.9 million were sold between 1957 and 1975. 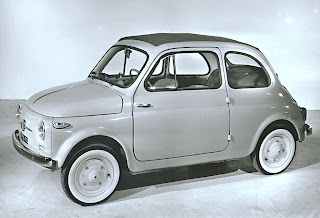 From there, we have a string of legendary cars, each one advancing automotive design into the modern age. The evolutionary 1964 Fiat 850 series, the 1964 Autobianchi Primula ( the precursor to the modern front wheel drive car), the 1966 Fiat 124 series, with it modern designed Twin Cam belt driven engines (the type everyone uses today), the brilliant 1969 Fiat 128 series ( the car which most modern transverse engine front wheel drive cars are based off). 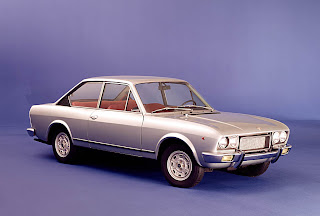 Before we leave, let's touch on the last car Dante Giacossa did for Fiat, the 1969 Fiat 128. It is a car that has influenced nearly every car on the road today.

Many auto enthusiast know and revere the BMC Austin 7 and Morris Mini. When these cars came out in 1959, they were the first production transverse engined front wheel drive small cars. They showed the dramatic space utilization that this layout could achieve. However, the layout of these cars had some dramatic disadvantages to them that limited the appeal to other major car makers.

The transmission was integrated into the engine sump and shared the same oil supply. This is not a desirable feature for several reasons. First the difficulty and expense of manufacturing. Second , servicing is much more difficult, Thirdly, engines and transmissions like to use oils with different characteristics. And an automatic transmission would be nearly impossible.

These cars also had a radiator fan driven by the engine with the subsequent radiator mounted in the right side fender well. This location was not ideal as it limits packaging alternatives. 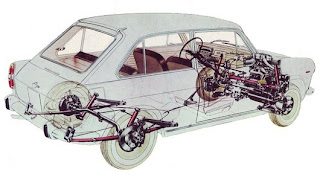 
It was a successful start.

Giacosa then designed the Fiat 128 series. This car was the first to combine the transverse mounted engine with separate trans axle, unequal length drive shafts, McPherson strut front suspension, short stroke Overhead Cam engine, front mounted radiator with an electric cooling fan. A full 80% of its space was devoted to passenger room. A popular advertisement for the Fiat 128 back then stated, "it's smaller than a VW Bug, but has more room inside than a Cadillac Eldorado". 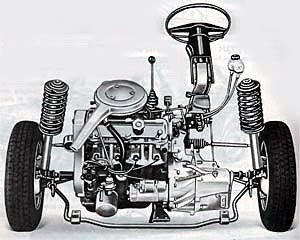 Giacosa demonstrated with the Fiat 128, that it was a viable power train layout suitable for economical mass production and offered clear advantages over its rivals. After seeing the success of Giacosa's design, other car manufacturers soon brought out their own copies of the 128. 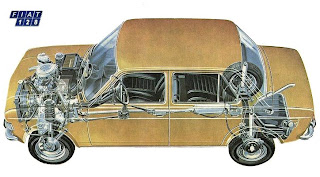 
At its peak, the Fiat 128 won more car design awards than any other car in history. A fitting tribute to a man that made life better for millions by providing thoughtful, often brilliant designs that could be afforded by the average person. 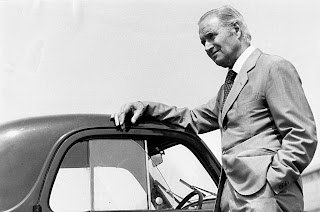